Apparently moving to Costa Rica means I have to give up the bad habit I picked up when I turned Sixty. I have plenty of bad habits that I can still do in Costa Rica, but those all involve my body.

I need a new bad habit that is just a foolish pleasure.

There are no good cigar stores in Costa Rica.

There is a cigar maker in Costa Rica. A woman was rolling cigars just outside the gate in the San Jose aiport.  She is not a Cigar Doll… 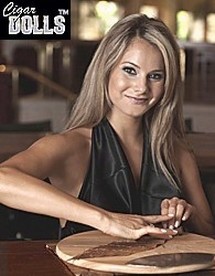 …but is right next to the woman giving away free booze.  Nice. The free booze girl even gave me a double rum shot once when I walked by with my Sbarro coke.  (I got a coke there because they didn’t have a line – not surprising, right? Is there anything worse than Sbarro pizza?)

But the cigars were ten bucks each. Discounting the airport markup, I figured a cigar probably runs $5 each. And that’s way to pricey for me to burn. Even if I only smoke one or two a week, that’s 10-20,000 colones! Just the thought of spending 10,000 on anything, gives me pause.

Nancy loves the 1820 brand of coffee that she has found only in Costa Rica. She has imported contraband bags and has her friends hooked. Since Costa Rica has some fine coffee – including our crop – I thought perhaps this could be my new bad habit.

When I read this today, it just seemed that it was meant to be…

The study, recently published in the Journal of the National Cancer Institute, found that the men who drank six or more cups of coffee each day were 20% less likely to develop any form of prostate cancer. Even among men who drank one to three cups a day, lethal prostate cancer risk was reduced by 30%.

The Prostate Cancer Charity urged caution about the findings, and said that men shouldn’t as a result of it alter their current routines if they weren’t already coffee drinkers: “Although this study is a welcome addition to our knowledge, it is far from definitive and we would not recommend men who are not already habitual coffee drinkers to become so in the hope of preventing prostate cancer … Heavy caffeine intake is associated with other health problems and men with benign prostate problems might well make urinary symptoms worse.

So drinking a dozen cups of coffee sitting by the pool while watching toucans doesn’t seem like a new bad habit I will take up.

Any ideas for a new bad habit?  It must involve spending of money foolishly, and be enjoyable. Not being approved by the woman of the house is a bonus.

Maybe I’ll just go back to being boring, predictable me with the same old bad habits.

Or maybe I’ll take up gunnery. Shooting toucans would be a hoot.