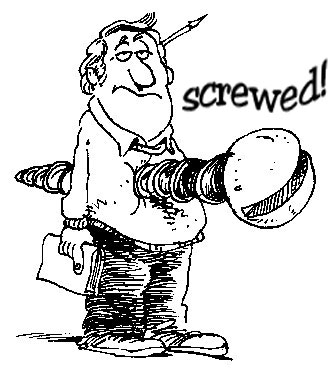 I just walked up the street to have a large Chai Tea latte. It’s not a regular deal with me, but when the weather is perfect, and I want to get out of the orifice for a while, I stroll up to Spencer’s.

Yesterday, Nancy drove to Louisville for some spare car parts and to do a little shopping. Today she is in Frankfort doing a little Costa Rica residency paperwork.

I will stop at Arby’s for a Market Fresh sandwich about noon on my way home to let the canines out to evacuate their intestines.

On the way back to the orifice, I’ll probably get the car washed.

Everybody will speak some form of English… even if it is:

I’ll surf the web on a fast, stable internet connection.

Tonight, we’ll tune in the NBA Playoffs in HiDef.

I will be so screwed:

I think I’ll be OK. I think Nancy will be OK.

But one never knows does one?

I could be so screwed.

Even though we have moved before, I’ve never moved and been unemployed before. Our moves were always tied to a job change, which meant an increase in pay which meant we would spend more. Not that spending equates happiness. As a matter of fact, Nancy was pretty  miserable in one of the places we ended up.

I don’t think I will be miserable at Sedolosoder. I just can’t imagine what our life will be like. As most people observe “it will be an adventure.”

So is haulin’ balls in whitewater, but some times an adventure turns out badly.

I could be so screwed.