I KNEW I would find them. Of the thousands and thousands of pictures I have looked at over the past month deciding which to keep and which to pitch and which to send to daughters to pitch (!), I knew I would run across the pics of my run in with a Maple tree.

Of course, they show up AFTER I’ve published the post.

My brother was killed in a car wreck about a year before my wreck. 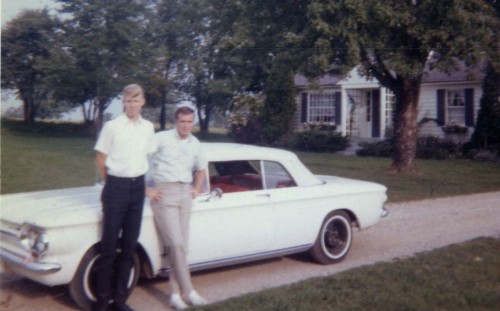 He was driving the Death Trap – a Corvair Monza convertible with four speed. The car that made Ralph Nader famous. We both liked to drive fast. He died. I didn’t. He was just a few miles from home on a sweeping curve. The kind of curve that someone driving a sporty little car would try to take at high speed. The rear of the car passed the front and the Corvair ended up backing into a tree.

Comparing the damage to the two cars, a reasonable person would guess that I would be the dead kid. The damage to the Corvair was a semi-circle crunch that matched the diameter of the tree.

But can you imagine the whiplash?

My dad had to go by the wreckage of the car I was driving on the way to the hospital where they took me. He was positive he had another dead son. Can you imagine the feeling in his stomach?

By the time I was 23 my brother and my son had died.