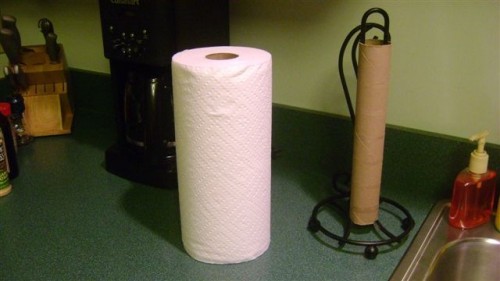 A Bethlehem, PA man recently withstood a vicious snark attack and survived with his integrity and decisiveness intact.

David Frederick, a singularly handsome and intelligent man of well known and widely respected integrity was faced with a decision all married men face eventually. His remarkable strength under intense pressure should serve as an inspiration to men across the globe.
A local man today avoided certain death by not over-exerting himself changing out a roll of paper towels.

The man, David Frederick, when asked by his wife whether it would actually kill him to swap them out, responded

Though he got close to changing it – the roll made it within inches of the holder – he insisted it would have been much too difficult to lift the old roll and put on a new one.

Despite intense pressure citing junk science from The Junk Drawer, Frederick summarized and articulated his sound argument in a few well chosen words.

I just didn’t feel it.

David Frederick is a well-read and energetic raconteur. His knowledge of a broad range of interesting subjects is legendary around lovely Bethlem. His stout resistance to such outrageous and incendiary snark is inspirational.

“I mean, he went to the trouble to get a new one and put it down next to the holder. The empty roll weighs, what, two ounces? I just don’t understand it,”

his wife Kathy spewed on her blog today.

Mr. Frederick, has her strongly sensual love muffin for twenty years, despite her proclivity to quote from an unknown researcher to support her thinly veiled disregard for his obvious sense of well-documented self-preservation.

The research was purported to conclude:

“Once a habit of neglect has been formed, it’s very hard to change, particularly for husbands. They have a hard time with toilet paper rolls, too,” he said. “It’s just asking too much.”

The erudite Frederick provided this comment that will be the basis for further study by thinking-men for decades:

I hear some people see their when they have those near death experiences. Some say they are in a tunnel and see a light at the end of the tunnel. Sad but I did not have these visions. I did hear a voice that sounded like my wife but it was hard to detect over the Stanley Cup Final.

Be brave Mr. Frederick and know that we are out here supporting you and understanding the challenges of living with a blogger/anal retentive/exercise crazed person while trying to watch the NBA Finals.