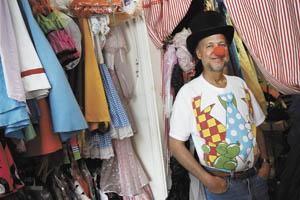 When small business clowns don’t get health insurance and get sick, the community is asked to bail them out. It is happening all over the U.S.

A great example is Broadway the Clown of Bowling Green, Kentucky.

Broadway The Clown is a fixture at Bowling Green fund-raising activities. He often gets paid, sometimes he doesn’t. Broadway is actually Nick Wilkins, the owner of Balloon-a-Gram. He was diagnosed with prostate cancer.

Instead of buying health insurance because it is too expensive, he is taking a hand-out from do-gooders. Many of these same do-gooders are very vocal against providing affordable to health care to those with pre-existing conditions. They are against Obamacare.

While Wilkins gets back in the swing of things, he has many medical bills he’s trying to pay. Having had neck and back surgery in the past, Wilkins was denied insurance, and when he found an insurance company that would accept him, the price was too high for him to afford.

So instead of demanding that Mitch McConnell and the Republicans support Obamacare, the local do-gooders are playing golf.

Wilkins is the beneficiary of the sixth annual Day for Danny Golf Benefit, which will be Monday at Indian Hills Country Club.

“Broadway the Clown is always a vital part of any event we have in this community,” said Bobby Hilliard, one of the organizers of the event. “He’s a staple here. We thought it would be great to sponsor him.”

I’m tired of the local newspaper making it front page news when somebody who is uninsured or underinsured needs a community benefit to pay their medical bills. What about the thousands of other people who don’t have the community connections or appealing sob story? What about the schlubs who are working three jobs just trying to survive? What happens to those medical bills? Who pays them?

You know who! Clowns like me through higher insurance premiums and higher taxes.

The only answer is to force everyone to have insurance. Force those healthy people to buy insurance to pay for those unhealthy people’s care.

Everyone. Even small business clowns.