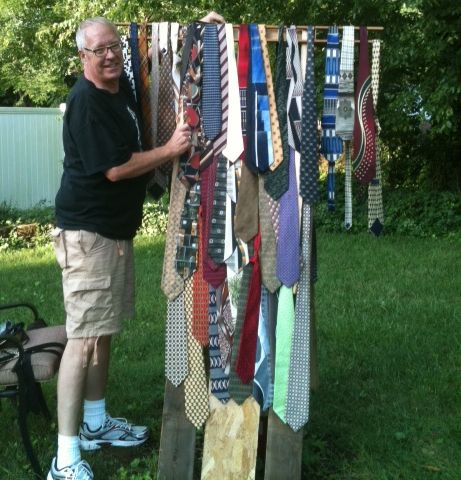 Jeez I love fireworks! Now that they are legal in the city, don’t really need an excuse to shoot ’em off. Ya pays ya money ya gets to blow things up.

But to have a real reason to explode things and set stuff on fire is just outstanding.

The Three Teir Tie Pyre was my celebration of NO MORE TIES. I am retired! What better way to celebrate than to torch some ties!

Enjoy! I sure did… and if you torch a tie or two, be sure to post in on the Burn All Ties Facebook Group.

An Englishman, a Scotsman, an Irishman, a Welshman, a Latvian, a Turk, a German, an Indian, several Americans (including a southerner, a New Englander, and a Californian, an Argentinean, a Dane, an Australian, a Slovakian, an Egyptian, a Japanese, a Moroccan, a Frenchman, a New Zealander, a Spaniard, a Russian, a Guatemalan, a Colombian, a Pakistani, a Malaysian, a Croatian, a Uzbek, a Cypriot, a Pole, a Lithuanian, a Chinese, a Sri Lankan, a Lebanese, a Cayman Islander, a Ugandan, a Vietnamese, a Korean, a Uruguayan, a Czech, an Icelander, a Mexican, a Finn, a Honduran, a Panamanian, an Andorran, an Israeli, a Venezuelan, a Fijian, a Peruvian, an Estonian, a Brazilian, a Portuguese, a Liechtensteiner, a Mongolian, a Hungarian, a Canadian, a Moldovan, a Haitian, a Norfolk Islander, a Macedonian, a Bolivian, a Cook Islander, a Tajikistani, a Samoan, an Armenian, a Aruban, an Albanian, a Greenlander, a Micronesian, a Virgin Islander, a Georgian, a Bahaman, a Belarusian, a Cuban, a Tongan, a Cambodian, a Qatari, an Azerbaijani, a Romanian, a Chilean, a Kyrgyzstani, a Jamaican, a Filipino, a Ukrainian, a Dutchman, a Taiwanese, an Ecuadorian, a Costa Rican, a Swede, a Bulgarian, a Serb, a Swiss, a Greek, a Belgian, a Singaporean, an Italian, a Norwegian and 47 Africans walk into a fine restaurant….