I have worn neckties for 35 years, (not including the years of my Sunday School suit.)

Only in the past few years have I not worn a tie every day to work. I am sick. sick. sick. of tying that piece of cloth around my neck because some stupid society rule says that a person in my position will not be taken seriously unless adorned in such a manner.

Therefore, as I am tired of ties, I have made a three tier tie pyre and will be burning and exploding my ties this weekend, weather permitting. 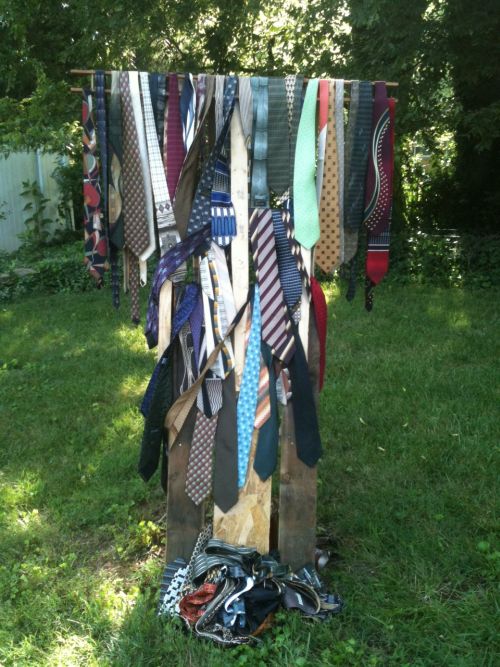 The kickoff tie burning will be at 7 pm in my backyard. You are welcome to attend. BYOTTB (Bring your own tie to burn.)

When I started on the street selling newspaper ads, suits were the norm. A salesperson dare not walk into a client without a suit and tie and neatly pressed shirt. Even while in the office, the expectations were that we kept our suit coats on at all times. There was a code.

The only respite from that abomination was another: the leisure suit. Those were the days… when wide labels and long hair were fashionable. But in a world that still admired a man in a suit, it was risky unless you were the right age.

I was. I could pull it off – and did. I had a fantastic selection of polyester leisure suits, and I loved ’em. Luckily my boss was of the right age too, and he dressed in leisure suits too.

I think I impressed the hell out of him when I showed up in this get-up one day. Nancy made a vest and tie for me using material that had we had run through the printing press to capture a special edition front page of the newspaper. 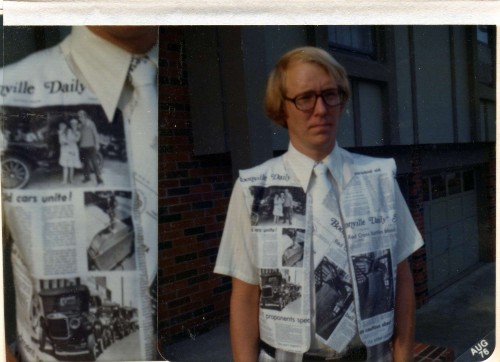 Dress like the boss. Or in this case, dress better than the boss. Pretty good advice then, but hardly applicable now because the boss might be some punk ass kid or a woman.

One thing: why are neckties still around?

After over-spending on ties for many years, Nancy found a new way to save us money. She found ties for $5 each or 5/$20 at the New Orleans French Market. Instead of paying $20 + for one stupid tie, I could now buy five stupid ties.

Of course, from time-to-time, she was required to make a “new-tie” run to New Orleans. The you-won’t-believe-how-much-I-saved-you kind of trips.

And those neckties will out in a blaze of glory during my Three Tier Tie Pyre.