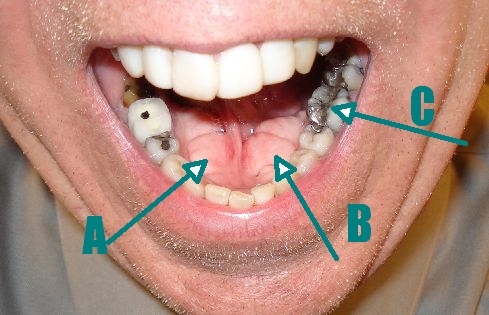 “That’s some mouth you got Mark,” Dr. Blevins said throwing up his hands.

He was giving up on my mouth. He said to take my mouth and go to Costa Rica and see if I could find a dentist down there to replace my crown.

I have tori mandibular.

A Torus on each side of my palate. Two torus = tori.

See A & B above, Tori, Tori! (tongue is lifted for illustration purposes.)

I lost a crown a year ago and since it didn’t hurt I didn’t bother to have it replaced. At the next check up with Dr. Blevins, he said I should have the crown replaced because the tooth could decay. If I still had the one that came off, he could just glue it back.

Well damn the luck. I knew the tooth laid around on the bathroom counter for months. Who knew that it was actually recyclable? I’m pretty sure I threw it away.

Dr. Blevins said he would make a new mold and have another crown made and fix it.  Three molds later, he has given up.

Ever had a crown? You know that nasty tasting junk they shove in the tray to make an impression? Because of my torus mandibularis my mouth gives them a bad impression if they use a tray.

Mouth. Bad impression. Heard that before!

In order to try to get a good impression out of my mouth, Holly, the dental tech, just shoved a gob of that dental play dough in my pie hole.

My torus mandibularis had beaten Dr. Blevins at his game.

My mouth has been known to send some adults away, but for sure, when I show a kid my torus mandibularis I get a great reaction.

Nope, they are just like my gums to me.

Yes, but they took a life-time to get this big, so I  won’t have tusks as I age.

This is the hardest. This is my normal mouth. Since I never had a mouth without torus mandibularis, I don’t know any different.  It’s my normal, which is abnormal.  Heard that before too.

OMG, yes. Good lord there is nothing worse than getting a kernel of popcorn lodged down there. The only way to get it out is to swish it out.

Letter C represents my retirement fund. Silver is on the rise and my mouth is getting more valuable by the minute. Just hope the torus mandibularis don’t grow over my estate.

When the heirs gather around and my will is read, I want them to think good thoughts when the lawyer says, “That’s some mouth Mark has.”