What did you used to be?

Never occurred that somebody might ask me that question someday.

We say “used to be” at major transitions points in our lives — as we look back to the certainty of what was as we stand poised for the uncertainty of the future.

I guess I never “used to be” anything. Or maybe it’s a guy thing that we define ourselves differently? I had milestones in my life that impressed my mother. But Mothers are easy to impress.

After all, she is the one that saved my baby teeth.  She was impressed when I used to be drum major in front of the band. There was a bunch of things in my life that impressed my mother. My first business card! I think she cried.

I had a string of “used to be” titles that might impress some people. I never was impressed much by titles, mostly because I knew many to be bogus – based on popularity or longevity. Hang around long enough and don’t piss off too many people and you too can become President of the Chamber of Commerce.

It isn’t all that different in early retirement when, at least initially, who you are in your own mind is more the person you used to be rather than the person you’re becoming. It’s harder for some than others. Observing people whose retirement wasn’t voluntary,  I see some of them choke on the words “used to.” Others scramble to find a new cause, a new identity, to fill the gaping hole of loss.

Dr. McCoy says I should be thinking about my “used to be” description. 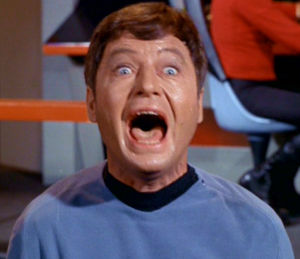 Not This Dr. McCoy - I bet the Real McCoy gets sick of being compared to Bones.

During most of my career I held a job that confused people. They would ask where I worked and I would respond “at the newspaper.”

Oh, are you the editor?

No, I’m the publisher.

Everybody knows what newspaper boys do.

When I came to work at my current job, it was a family-owned newspaper. No publisher-track career here. That was reserved for family. I was General Manager.

Lots of people know what General Managers do, they generally manage things generally.

In a couple weeks, I guess I will be a “used to be” Newspaper General Manager. Or paperboy. I think it will be fun to tell my new Costa Rica acquaintances I was a paperboy.

Dr. McCoy says I need to be ready to grieve. She says she sees it a lot – even when retirement is voluntary. I’ll be ready, but I don’t think I’ll be grieving. I’ve been preparing for retirement the last 20 years.

One thing we do agree upon:

We can look back wistfully to the days when we had small waists and firm thighs.