Today, the beginning of my second week at Sedolsoder in Costa Rica was a day of firsts before midday. 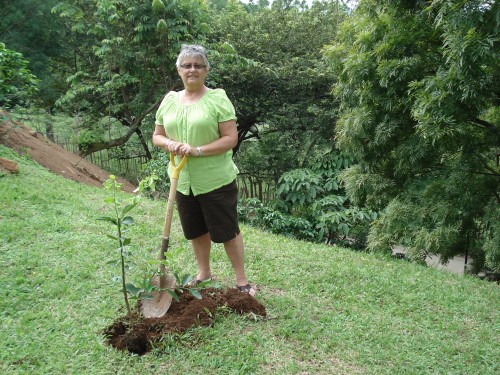 The first first was the first planting in Nancy’s Friend’s Garden. Never having been much of a planting person (planting means we usually just inherited the previous homeowner’s flowers and then let them go to hell from neglect.

We have been told that anything grows anywhere in Costa Rica with little or no care. The proof is all around us – the untended fence posts are full grown trees. Farmers will stuff a tree limb in the ground and wrap some barbed wire around it. When left unattended, these limbs turn into trees.

I think I can grow things here.

Nancy had a fantastic idea – one that is certainly “old hat” to flower gardeners everywhere.  She wants a Friend’s Garden.  Every friend gets to choose a plant for the Friend’s Garden.  Cheryl, our first visitor, chose a lemon tree.  Frances, who is a new friend that lives here, chose oregano. “Because it should be something useful.”

The lemon tree went into the earth today. The oregano will be pot grown until our construction is completed.

The Friend’s Garden will be visible from our bedroom window.

Isn’t that a great idea? 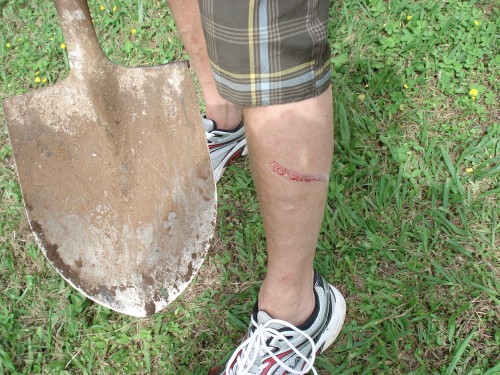 The second first was the conquering of a fresh coconut.This also provided for the third first – first blood.

The coconut tree is near the Friend’s Garden. The nuts have been tormenting me since I arrived. Nancy was sure that when they are ripe, coconuts fall to the ground. I know from watching Survivor that one must go get them.

The first blood was the result of an out of control shovel. Having little experience with garden implements when using them to knock coconuts out of trees, the I took a mighty swing and missed – the coconut – but hit my leg.

The coconut I grounded after a few more swings was too young. It was full of pipa (coconut water) but no meat. As with most things, it was a booger to get to the water. Luckily, the borrowed shovel was a handy tool for peeling the coconut. And from sheer dumb luck I knocked a hole in the coconut to get to the pipa. I’m not impressed. It’s just water. 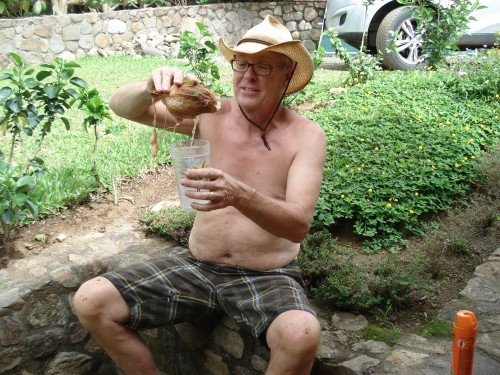 But I’m told it is a helluva laxative. Let’s hope this day doesn’t have a fourth first: the Sedolsoder Squirts.