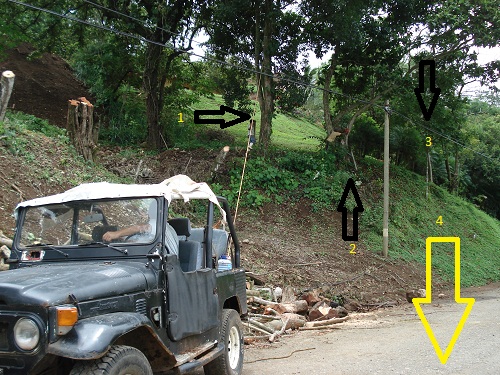 Here’s a scene that plays out across the globe. Four guys, two chain saws, a rope, a beater four wheel drive — and two trees that were “in the way.”
The trees didn’t stand a chance. But they didn’t go down easily and threatened to do serious damage via gravity.
A good time was had by all.
As with most guys, there was a lot of yelling and finger pointing and laughing as the “plan” to take out the two trees was “formulated.”
Since one of the trees was “on my property” (that’s a story yet to be resolved) and had the potential to do the most serious damage to the utility lines, I wanted to be reassured that I wasn’t liable for damages.
Silence.
In Spanish, Patrick asked the chain-saw guy if the tree would fall on the utility lines.
No. No. No.
And then he grinned.
And Patrick grinned at me.
We will wrap the rope around the tree and around another tree and pull it up the hill away from the lines, he explained.
I grinned.
Apparently Patrick and chain-saw guy had not heard about gravity. When the car is lower than the tree and the anchor tree is at the same level as the victim tree, and the utility lines are lower than the tree, there is no other way for the tree to fall than — wait for it — down.
The victim tree was dying from the inside. What was left were three giant limbs growing out of basically a stump. He says, justifying what just was way too much fun.
The other victim tree was at the base of a major drain – built under the supervision of Patrick – without permission on our property. (Pura Vida!) The torrents of rain of course were washing away the root support systems and that tree WOULD eventually fall on the utility poles.
So it became a victim too.
Nancy said it was quite entertaining to hear a bunch of yelling as chain-saw guy yelled at care-taker guy who yelled at Patrick, piloting the beater.
Then much laffing.
Then chain saw noise.
Then LOTS of yelling. LOTS.
And the beater roaring it’s disapproval of the abuse.
And the tree cracking.
I even got in a few choice words. As St. Todd DeCubbville, the expert tv camera operator, points out, I missed the money shot.
Then a moment of silence followed by more laffing.

But it’s not bad considering I had my eyes closed the whole time.
Four guys, two chain saws, a beater, and two trees become two stumps.
A good time was had by all. 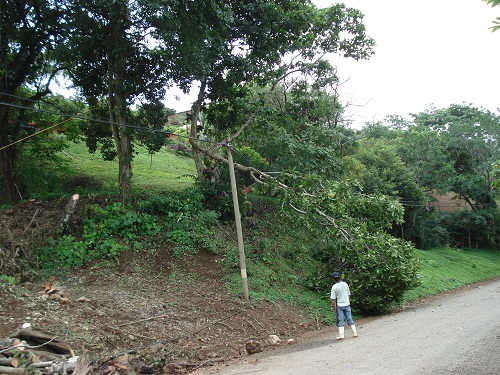 My "Oh Shit" Moment of the Day