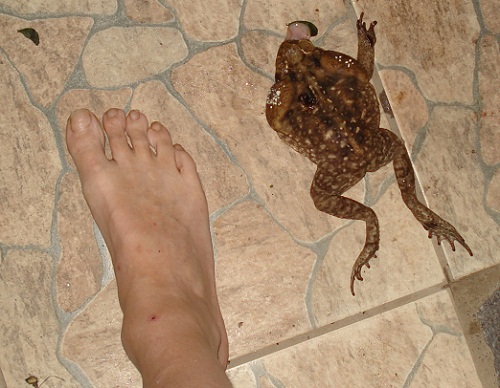 There are killer toads loose in Costa Rica. Unlike Pat and John, we had been alerted to the nasty critters and I prepared a special clubbing instrument.

Frances at the Lighthouse Animal Rescue had warned us of the “bufo” toads. It’s a misnomer to call a toad a “bufo” because that is the name of the class of toads.

(Note to self: class, toads, never use those two words together again. Toads have no class. Remember Terry the Toad from American Graffiti?) 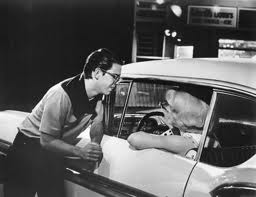 John does a good job explaining why Gringo dog owners freak out at the sight of a toad. Go read the blog.

Except he forgot to mention the horrible death a dog suffers if it grabs a toad. The toad secretes poison and the dog will immediately go into seizures with certain death to follow unless action is take to dilute the poison and administer a shot of eppy.

Our toad was on the rancho last night when Nancy went to walk Sofi and Oliver (on leashes.) She spottedit and let out a yell. I grabbed my trusty walking stick and approached with caution.

Like John, my machetes (yes I have two brand new ones and one used one!) are coming in the container. Bud says he uses a five iron. Thanks Bud! My golf clubs are in the container too.

The toad was not anxious to escape. I didn’t take a big backswing because I didn’t know how it would react to my movement. So I did a shortened “Kill Bill” hee-ya move. That just stunned him for a moment, but that was all I needed. With a rapid succession of whacks I beat that sumbitch until his guts came out his mouth.

My foot measures 10 1/2″ – the toad would be longer if stretched out – including the guts coming out of his mouth.

There are now two less bufo toads in Costa Rica and my days of letting the dogs run free have ended. That damn toad scared the crap out of me.

Nancy said I should have seen the one that got away.

No thanks. But if I do, I want a machete or clubbing instrument of death.