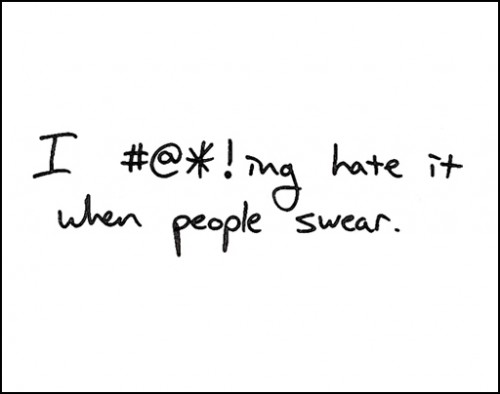 One of those “lets-ask-some-college-kids” surveys says that cussing helps relieve pain.
Other “facts” revealed by similar surveys:

So who is surprised that a bunch o’ colletch kids say swearing helps reduce pain?

signs of a “fight-or-flight” response that may help mitigate actual pain, according to Richard Stephens of Keele University in Staffordshire, U.K.

Then in brilliance that hasn’t been seen since the sun exploded:

Swearing is emotional language. If it’s not fear, it might be aggression.

Dr. Gail Saltz, professor of psychiatry at New York Presbyterian Hospital and a psychoanalyst with the New York Psychoanalytic Institute, said that a fight-or-flight response absorbs mental capacity so you can’t think about your pain, and increases certain nervous system functions while slowing down others — such as gut function — to maximize chances of survival.

“If you’re screaming obscenities, you’re not thinking about your pain,” she said. “The distraction compartmentalizes the other experience. Many a woman in the delivery room has already figured that out.

So a bunch of academes conducted a study of 67 undergraduates from Keele University who were asked to submerge one of their hands in freezing cold water.

One group was told to swear to their hearts content of their choice during the immersion, while a control group repeated an innocuous word that would be used “to describe a table.”

The researchers looked at how long both groups left their hands in the water as a measure of pain tolerance. They also measured pain perception and heart rate immediately following the submersion. They found that swearing significantly increased pain tolerance and heart rate, and decreased perceived pain, compared with not swearing.

“If they swore, they held their hands in cold water for longer.