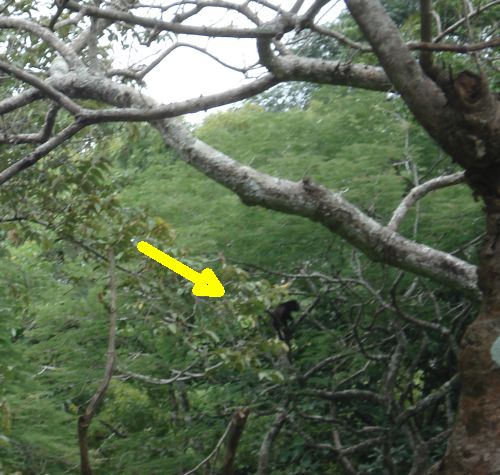 My chore of cleaning the pool filter was delayed because of a Howler Monkey. We have heard them before, usually early morning or early evening but always seemed too far away to investigate.

Midday as I was prepping to do another chore, I heard the Howler again –  only this time much closer. I gave up on the chore, grabbed my walking stick (every explorer needs a walking stick) and set out toward the sound.

As I was coming down the hill before the gate a family of humans were walking toward me and said the Howlers were hanging out where they could be seen.

Sure enough, just outside the gate and 50 feet down the road, I could spot the male sitting in the tree. He was about 50 feet off the road, but in plain sight. I headed back to the house to get binocs and Nancy. The second time he had moved back into the deeper forest and was invisible. But he moved and another monkey was alongside.

The human family happened by again and said it was a family of monkeys because they saw the two with a baby.