Yeah, it’s time… I’ve been getting signals for too long that I just can’t ignore.

It’s time to write about weinies, Johnson, schlong, The Situation.

This post got it’s seed when that Congressman sexted his dick pic. Everybody wrote about it, except me. Too easy.

Then I grilled the absolute worst wienies in the civilized world.

Still not enough to motivate me to write about it.

But when Jamie the Very Worst Missionary got flashed in the hardware store, I knew it was a message from Jesus that was calling me to write about wienies.

The Worst Wieners in the World

Nancy had the great idea that some hot dogs on the grill sounded tasty. She snatched up some wieners at the local supermarket and I plopped a few on the grill. I walked inside to get a tool to turn the wieners and heard a small pop . Didn’t think anything of it until I returned to see that the wieners were deformed and splitting.

Wieners here in this developing nation are encased in plastic. One wiener had split so I poked another and the sumbitch exploded… the others expanded out the ends like they had a porky-imitation meat hernia. I was determined to eat at least one, so I decided to peel the cooked plastic from the meat. I have been told that this plastic is actually edible. After peeling away the plastic, I decided that my peel and eat days will be limited to the shrimps, not the wienies.

Jamie wrote her account of getting “flashed” in the hardware store.

“See that guy over there, in the red sweater? NODON’TLOOK!… Well. I just saw his wiener, like, the whole thing!… But it might have been an accident. Can that happen? Can a guyaccidentally drop trou in a hardware store?… Babe?…Honey?…. Hellooo?”

Jamie was pretty much flummoxed by the whole episode. She asked her readers how they would handle the situation.

I replied that I was now going to call my wienie The Situation. Even though the nickname has been taken, the possibilities are just too many to not grab on to The Situation as a nickname for my wienie.

Since Jamie is The Very Worst Missionary, my mind could not help but wander to the bible angle on seeing a strange wiener. Is there any mention of The Jesus Penis in the bible? (Note: Gee-zus, not Hay-sue)

Seems there is the painting in Oklahoma that would indicate there is The Jesus Penis. 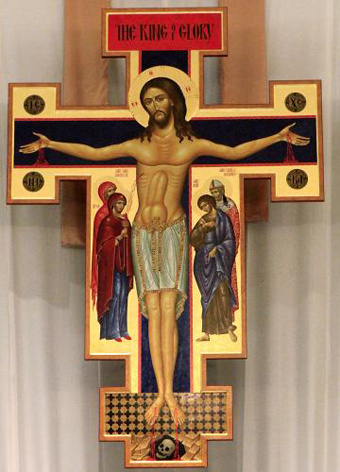 Oklahoma churchgoers are not very pleased with a new crucifix that appears to grant Jesus a rather sizable dick. Crucifixion? More like “Cruci-dick-tion,” am I right?

Jesus Penis. Boy, the way that rolls off the tongue, it may become my “go-to” cuss phrase. Certainly stronger than “Judas Priest” but, to me, not as strong as the F word. Jamie would disagree…

If I had the guts I would ask her about The Jesus Penis and any references in the Bible. But since her husband is a goat killing hunk who could kick my ass with both hands behind his back (he’s a coach/player for a Costa Rica semi-pro football team) I shall pass.

But she has teen age boys, I could ask them. They would know.

Jesus Penis those were some strange wienies!