I thought a lot about what it might be like to be retired.  day-dreaming about those days, I just couldn’t imagine what geezer guys would do all day. Geezer women always have a project going – whether it be volunteering or doing something crafty – or yakking on the phone.

Some geezer guys play golf nine times a week with the same group of guys. Good lord, that would NOT be me. How boring to hang with the same dudes, hearing the same complaints/comments/jokes/jabs playing the same eighteen holes, drinking the same beer. Boooooorrrrrring.

So in my day-dreaming for retirement, I figured I would spend all day on the innerwebs. No, I would not be one of those geezers that forwards email. I would be different.

Since we have OCI (Our Crappy Internet). I spend very little time on the innerwebs – especially on the computer. I use Nancy’s iPhone to check a couple news sites and stream radio broadcasts while sitting outside.

Today, I became one of *those* retired guys.

I have a project. 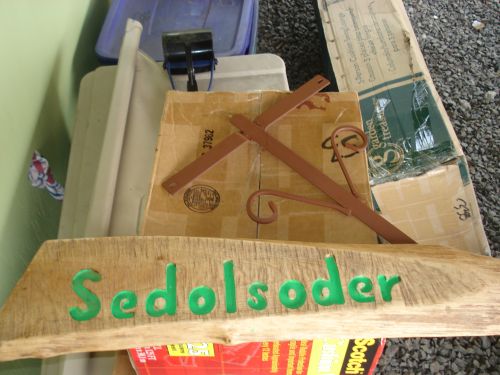 Two things were broken during the move: our ceramic house number signs. One was a souvenir of Savannah and the other was a souvenir of New Orleans. 733 and 752. I didn’t pack them, I just duct-taped them together and jammed them in the container. They were both cracked beyond repair.

Today, I am attempting a project.

I want to recycle the bracket that held 752 to display our “Sedolosoder” sign. Nancy bought me the sign for our anniversary. It was made by a local kid out of laurel wood. (The same as the ceiling in our Casa de Barky.)  We debated where to display the sign, thinking that it would be permanently affixed to the bodega or the gate.

We decided that having it mounted on a bracket that I can just jab into the ground would give us more options.

A project is born!

The bracket was starting to rust. Lucky for me the bodega painters left their unused anti-corrosive paint.

Today the project was to paint the bracket and mount the sign. It took me ten minutes to conceive the project – and two hours to find a paintbrush – and ten minutes to finish the project once the right tool was located.
The only thing missing was a trip to Home Depot to buy a paint-brush because I couldn’t find what I was looking for.
Nancy was the alternative. She rummaged around and found one of her well-worn artsy-fartsy paint brushes and let me use that.
All that’s left now is to stain the Sedolsoder wood. I am sub-contracting that portion of the project to the guy that ends up staining our ceiling.
So it’s a pretty typical retired geezer project, a brilliant idea followed by a lackadaisical execution and completion by somebody else.