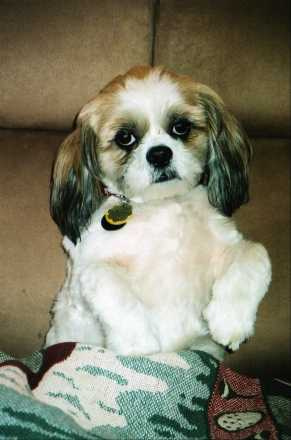 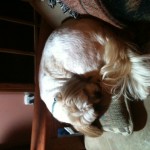 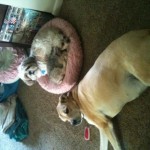 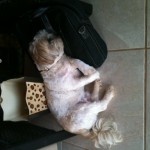 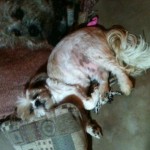 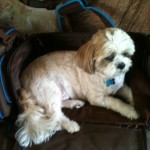 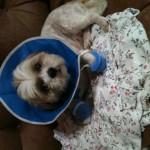 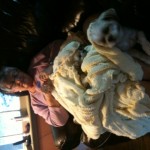 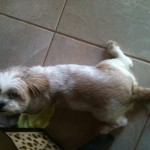 As dogs go, Oliver was more of a cat.

We buried Oliver last Friday because of advanced Autoimmune Disease. He had the symptoms for years, it just went undiagnosed.

We treated Oliver constantly for these problems. We tried prescribed treatments and over the counter stuff and home remedies… nothing solved his problems because he had a disease and these were the indicators.
Oliver finally crashed after suffering for years.
I woke up one morning to a puddle of very bloody urine. Our vet suspected the disease right away, but ran a battery of tests to eliminate other problems. She even consulted with the university vet school. She gave him blood transfusions – and took him home to see to his care and treatment.
She was always cautiously optimistic.
Last Friday, I got the bad news.
Oliver was not responding to treatment. His own body was attacking his blood cells. He was dying.
I called Nancy immediately and we decided that the time had come to say goodbye.
Oliver died in Nancy’s arms.
I’ll never forget walking into the vet’s office where she sat broken-hearted with Oliver at her side. When Nancy spoke there was a brief flick of Oliver’s tail of happiness to hear his master’s voice.
James Oliver Crowell was always “Nancy’s dog.”
We adopted him when he was five because she wanted a “lap dog.” Oliver was the only pure-bred among us and had the AKC papers to show it. He was a handsome fella. Big eyes, stubby little nose, wonderful light brown and white coat. His face was perfect… unlike many Shih Tzus… Oliver’s teeth didn’t show when he was at rest.
As dogs go, Oliver was more of a cat. He just loved to find a high perch and curl up. On top of a pile of clothes, a pillow, my briefcase, etc. Anything that would give him some prominence in the room – Oliver wanted to be there.
It was clear that Oliver had been abused by a man. For the first year or two, he didn’t want much to do with me. I got my first dog bite from Oliver. He needed some meds, and he dove under the bed to escape. I reached under to get him and pulled back a bitten hand.
After a while, Oliver learned to purr. Of course, it was his soft, low growl to let me know that I was nearing his break-point. I could get him to “purr” by sitting down beside him and giving him a gentle jostle. The more I jostled, the more he “purred.” He never bit me again. He knew I was his friend.
But Nancy was his idol. Oliver shadowed her. She put a small bed at her feet in the sewing room and he would curl up and snooze. If she moved, he moved. He would follow her from room to room, if not on foot, with his eyes.
But the most endearing part of Oliver was his hug when we returned home. The other dogs would rush to sniff and lick. Oliver would stand up on his hind legs and reach his front paws up to Nancy for a hug with a wide-mouth grin on his face. We never captured a picture of his grin… but it was a classic.
No more hugs from Oliver.
No more purring.
No more enthusiastic tail-wags.
Goodbye Oliver boy.
—-
Update: I’m not sure I have his AKC name right… no matter. He was Oliver.
I’m not going to mess around rotating the pictures right now. I’m too sad.
—
Update 2: one more memory: Oliver’s cue to do his “duty” was “Oliver, let’s go to the mailbox…” He was the ONLY dog we owned that was allowed to walk off leash to the mailbox. He never took a direct path. Eventually I would walk with him to the mailbox, then to the corner where he would turn and head toward the garage. He would ALMOST poop on command… “Oliver! C’mon let’s go!!!” often got him circling to do #2.

(Not to scale - some colors may vary)