The Dick Van Dyke Show debuted October 3, 1961, fifty years ago. (Yes you are THAT old if you remember this as must-watch TV and will watch every re-run again and again.)

Surprising to me was the history of The Dick Van Dyke show and the convoluted route it took to finally get aired. The show was shot with the title Head of the Family and an entirely different cast. Rob Reiner was a known writer for Sid Caesar, and hatched the idea for a sitcom, with him appearing in the leading role.

Agent Harry Kalcheim, shopped the Head of the Family pilot script around, and actor Peter Lawford wanted to front the money to shoot the pilot. Once Reiner sent a script to Lawford’s father-in-law and supplier of the cash, Joseph P. Kennedy, Reiner was given the green light. The pilot was shot in December of 1958 in New York, with Reiner starring as Rob, Barbara Britton as Laura, Gary Morgan as Ritchie, Sylvia Miles as Sally, and Morty Gunty as Buddy. And then … nothing. The pilot failed to sell for the Fall 1959 season, and for the next year, Reiner thought the project was dead. But Kalcheim refused to abandon the show. He presented the pilot episode to another client of his, producer Sheldon Leonard.

Leonard realized this diamond in the rough and spotted immediately the one flaw: Leonard was not a sitcom actor, he was a sketch comedian.

Recasting the Dick Van Dyke Show proceeded and went smoothly until it came to casting Laura Petrie, the female lead. Many actresses auditioned, but it was Danny Thomas who remembered a cute button nosed girl “with three names” who tried out for the role of his daughter on Make Room for Daddy. (She was rejected because Thomas thought no one would believe her button-nose compared to Thomas’s honker.)

Tuesday, October 3, 1961, the premiere of The Dick Van Dyke Show. Reiner suggested the new title, following Sheldon Leonard’s tradition of naming a show after its star. Though no longer the lead in front of the camera, Reiner’s leadership behind the camera resulted in the classic sitcom of the 1960s.

The critics loved The Dick Van Dyke Show, but low ratings almost caused the program to be canceled after one season! Sheldon Leonard used his powerful influence to squeeze out four more seasons.

The show ended its run on June 1, 1966 with episode “The Last Chapter,” in which Alan Brady is set to star in and produce a television show based on Rob Petrie’s autobiographical novel.

Here are my recollections and recommendations for the Best and Worst of The Dick Van Dyke Show.

Best Opening Credits:
Dick Van Dyke’s Rob Petrie’s perfectly executed pratfall over the ottoman, and then later, his light-footed skip to the left to avoid tripping.
Best Costume Design for Lead Female:
Laura Petri’s Capri pants are what most people remember. I remember with the fondness of most 15 year old boys the top she often wore with the Capri pants. It was the plain white top with no seams or buttons in front which highlighted her pointy cone-bra. (OK, looking back her breasts were not THAT pointy, but I like my memory better.) 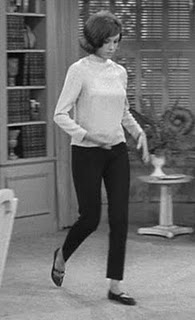 Worst Kid Actor:
Hands down, the worst kid actor – perhaps EVER – was Larry Mathews as Richard “Ritchie” Rosebud Petrie. The kid could not deliver a line without that smug little smirk, knowing that he was about to deliver a laugh line. Compared to the other kid actors: Tommy Rettig as Timmy in Lassie, Jerry Mathers as The Beaver, and the best kid actor of all time, Ron Howard as Opie Taylor, Larry Mathews deserved to be hit by a school bus and replaced by a pooch.
Best Guest Apperance:
Jerry Van Dyke as Rob Petrie’s bashful brother, Stacy Petrie, who becomes an extrovert entertainer only when he is sleepwalking. He appeared on March 21, 1962 in I Am My Brother’s Keeper and the following week in The Sleeping Brother. Carl Reiner makes his first on-camera appearance as Alan Brady in this episode.
Best Flashback Back-story:
How Rob and Laura met. Cute story called Honeymoons are for the Lucky. Rob is in the army, Laura shows up on base as part of the entertainment. It aired March 4, 1964.
Best Musical Number:
The Christmas Special that aired on December 18, 1963. I Am a Fine Musician…
Best Theme Song:
You can hum the tune, but did you know it has lyrics???

So you think that you’ve got troubles?
Well, trouble’s a bubble
So tell old Mr. Trouble to get lost!
Why not hold your head up high and
Stop cryin’, start tryin’
And don’t forget to keep your fingers crossed.When you find the joy of livin’
Is lovin’ and givin’
You’ll be there when the winning dice are tossed.
A smile is just a frown that’s turned upside down
So smile, and that frown will defrost.And don’t forget to keep your fingers crossed
Bud-ump bump!