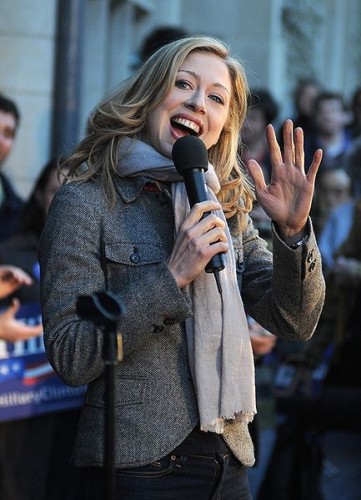 Chelsea Clinton will be a special correspondent for the shows specifically the “Making a Difference” series.

“Our ‘Making a Difference’ segments have become a signature of the broadcast. “They adhere to a simple goal of highlighting the good works being done across the country and around the world. Chelsea Clinton possesses an uncommon understanding of humanity. We are so excited she’s joining us to tell the stories of ordinary people doing extraordinary things.”

“I have long been impressed that Brian and his team at NBC place consistent importance on sharing stories of empowerment that in turn, help empower other people and families. I am grateful for the opportunity to contribute to this tradition.”

Oh just WTF makes the network execs think these spawn of famous parents will attract viewers? What are their qualifications other than name recognition? Have we sunk so low that this is how we want “news” networks staffed?

Apparently NBC thinks “yes, you are stupid and will tune in and give credibility to these spawn because of their parent’s notoriety.

Politico’s Ken Vogel tweeted that Clinton gave reporters the “total cold shoulder” during the previous election cycle. And Glenn Thrush echoed his Politico colleague’s experience on Twitter: “In ’08, Chelsea Clinton (in NH) told me ‘Sorry, I don’t talk to the media.’ I said, ‘But you are all grown up now.’ Now she IS the media.”

Whenever a network TV news division pulls one of these nepotistic no-brainers, it saps a bit of American journalism’s life force.

Chelsea has always seemed like a smart lady, and no doubt she’ll work hard at her new job. Still, wouldn’t it be nice if when you weren’t sure what to do with your life, the president of NBC News just called you up and asked you what type of job you felt like having?

We all owe our gratitude to NBC News for single-handedly correcting the shameful, long-standing exclusion from our media discourse of the views of young, journalistically accomplished heirs and heiresses to political power and great fortune.

UPDATE: She quit and apparently gave up a $600,000 salary.
She suffered some severe bullying…

NBC’s cozy relationship with the Clinton dynasty took an unexpected twist on Friday, when it was revealed that the sycophantic network paid the former first daughter – or should we say Princess – Chelsea $600,000 per year as a “special correspondent.”

It’s not uncommon for the offspring of politicians to land jobs in broadcast media. Jenna Bush Hager, one of George W. Bush’s daughters, is a special correspondent for The Today Show on NBC and recently interviewed her father about his paintings. John McCain’s daughter Meghan has worked her way through a number of lower profile media jobs after a short-lived contract with MSNBC, and John Huntsman’s daughter Abby remains a host of The Cycle, a daily news program on that network.