If it’s true that exercising your mind is good to delay the onset of Alzheimer’s Disease, then sending those people who are at risk to a foreign land may be the best thing for them.

I arrived at this conclusion while waiting for my turn at the bank teller.

Go to the bank to get cash and transfer money.

In Costa Rica, there are no standing in lines waiting for a bank teller – only to pick the line where a customer decides to conduct a complicated transaction, while the lines around you move a light speed.

In Costa Rica, you enter the bank, get a number, eg: A25, have a seat in some of the most comfortable chairs in Costa Rica (not saying much) and wait until your letter and number is called.

So right off the bat, my mind is getting exercise following the numbers and letters being called. A is “ah” in Spanish, 25 is Veinticinco. The V is not a hard sound, but more of a soft pffff to resemble an english B sound, but not quite.

Deporting Pre-Alzheimer’s folks to a country where they don’t speak English might be the best thing for them. Or it will drive them batty with stress. 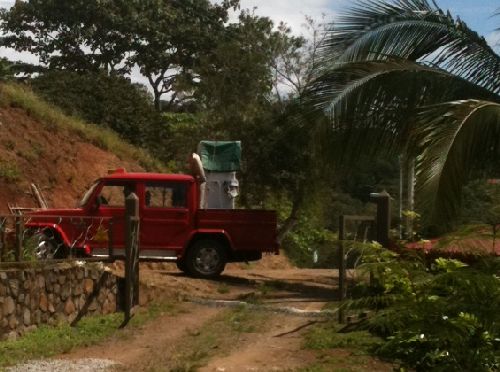 Buy a refrigerator in Costa Rica.

Convert millimeters to inches to make sure it will fit.

Convert Colones to Dollars to make sure you can pay for it.

Actually – don’t convert because you don’t learn anything that way.

And when you are done making the purchase… hire a taxicab to deliver your fridge. There is no store-delivery. (It cost $8 to have the new refrigerator dropped off in my driveway.)

No I lay awake thinking about how to say, “I live 500 meters past the school on the right side of the road, up the hill, in the brown house” in Spanish.