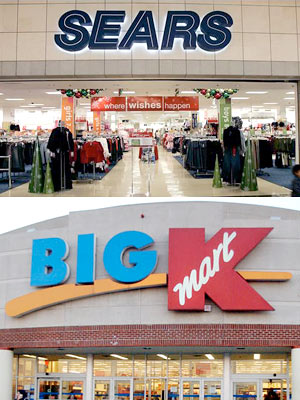 News today is that Sears will be closing 120 Sears and Kmart stores across the U.S. and Canada. This will come as no surprise to people who still might wander into a Kmart store or a Sears store looking for the glory days before Walmart.

The question that will be studied in B schools for years is: Did Sears kill Kmart? Did the Kmart acquisition kill Sears? Or were they both doomed because Walmart outdid them both?

Remember the Kmarts of old? Store managers were more than abused clerks. They actually had some power to stock their shelves according to local wants and needs. Of course when they screwed up, it created the iconic Blue Light Special opportunities. Blue Light Specials also kept shoppers captive for hours in stores during peak shopping times, like the day after Thanksgiving or Good Friday. Who in their right mind would consider leaving a Kmart to shop elsewhere when Kmart might run a Blue Light Special on Jeggings for 80% off?

Don’t need Jeggings? But they are 80% off. Forget need, it was all about scoring the bargains. Bragging rights.

At some point, some “genius” at Kmart figured out that the store managers had too much power. There were some store managers that did a horrible job of stocking their stores and the Blue Light Specials were killing profit margins.

So Kmart decided to centralize buying. A buyer sitting in Chicago decided what would be stocked on shelves in Fargo or Fairbanks or Flagstaff.

And then came Walmart. Buyers sitting in Bentonville are more like the people in Fargo or Fairbanks or Flagstaff.

Nobody who has worked closely with retailing ever thought Sears buying Kmart was a good idea.

Is there a brand that says “old people” more than Sears?

And by “old people” I mean Baby Boomers. We used to love Sears because they had good merchandise at a fair price and… AND… they would deliver, install, and gasp… even service… their big ticket merchandise.

What was Sears supposed to bring to the Kmart party?

One factor that Walmart capitalized on that was out of their control: Kmarts are located in old shopping centers on the wrong side of town. Sears stores are located in expensive malls. Walmart built standalone locations and negotiated mind-busting land deals because land owners knew that the out parcels would command outrageous prices once the store brought traffic to the location.

There you have it. Who killed Sears/Kmart?

They were both on life-support, but it’s Walmart that is kicking the cord that is loosely hanging from the outlet.

By the way, Sears Holdings still has almost 4000 stores. Stay tuned for more announcements of store closings during 2012.