After Nancy and her friend Terri met Pablo, our Costa Rica lawyer, Terri said, “I could eat him up with a spoon.” Her way of saying he was “he’s a cutie.”

He is a small man, but he and his partners throw a helluva a Christmas party.

One of his partners is a partner in Roma Vista – THE place in Atenas to throw a party, even if you’re not a part-owner. 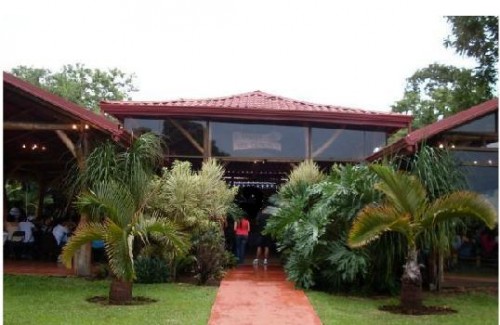 After a couple of very cloudy evenings, the sky cleared and the view was just spectacular. I thanked Pablo for arranging the beautiful light show of San Jose and the central valley. He said it was no problem, he called the meteorologist in San Jose and told him he needed it to be a clear night for his party.

San Jose is about 20 miles as the crow flies. Pablo is well connected apparently.

His party was one of those deals where you walk in and they have those linen coverings on the chairs. I think the last time I saw that was at our daughter’s wedding a bunch o’ years ago.

Cinthia, Pablo’s right hand woman, and my former real estate partner, showed us to Table Cinco and introduced us to Dave and Nansi, James and Patricia. James and Patrica had just closed the deal on buying Dave and Nansi’s house. Shelli and Roberto soon joined us. Shelli and Roberto knew Nancy because they showed her homes to purchase when we were looking.  Nice bunch of people.

The wine started flowing. Nancy found it easier to get a glass of wine than a glass of water. It became a running joke. She asked, and asked, and asked. Finally I went to the bar and asked for agua. When I returned to the table, I realized it was tonic. Nancy asked again, got more wine instead. Shelli and Roberto got served water, but not Nancy.

Eventually she got her water, to the delight of the entire table.

The crowd loosened up and started dancing to work up an appetite. After about an hour of dancing, the food was served. Pork and Chicken and all that kind of stuff. Delish.

Since this was our third party in three nights, we made an early departure – about 11 pm. According to Pablo, who I saw the following morning, we left before the real fun.

Typical for us. We aren’t heavy drinkers or dancers, but it would have been a fun experience to watch drunk Ticos dance. They (women AND men) really know how to swivel their hips. Hips Don’t Lie

Hope Pablo invites again next Christmas to his party. We’ll rest up and stay the duration.