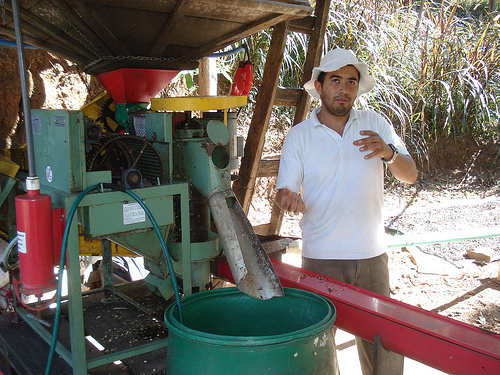 As with a lot of things, the best are close to home.

We wanted to take our Kentucky guests, Sally and Mary Kay on a tour of a coffee farm. (Wandering around our coffee plants next to the house didn’t qualify because we don’t process coffee, only grow it.)

In asking around “Long Tall” Sally, our friend who lives here too, said that the El Toledo Organic Coffee tour was the best.

And it was only minutes from our house.

It only took a few phone calls and Gabriel had us booked to tour the farm and have lunch.

We met him at 10 a.m. and immediately started learning about growing and processing of organic coffee.

That was a question he asked us early on. My response (which was not wrong) “because it’s the right thing to do.”

Har, when it doubt, be vague.

He was serious with his response:

Because of our health.

He said his father realized 14 years ago that all the chemicals he was inhaling was causing him health problems.  Five other neighbor fincas decided that they didn’t want to expose themselves or their families to the hazards of herbicides and pesticides any longer. They formed a tiny cooperative and started learning how to farm organic coffee.

Not because of the marketing, not because it was easier, not because they would make more money, but because … it was the right thing to do… for their health. 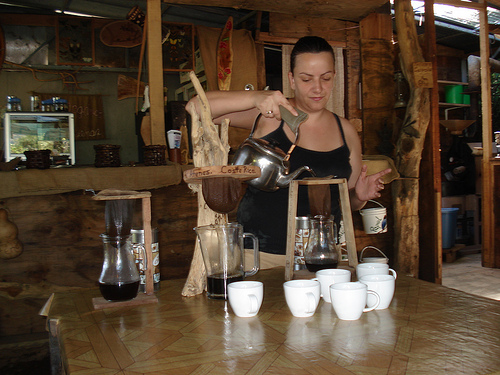 Since we were having lunch after the tour, Gabriel decided that the coffee tasting should happen first. He explained how they create light, regular and dark coffees and we sampled each.

We soon left the “Starbucks” of Atenas and started traipsing among coffee beans spread out on black plastic and on mesh screens drying in the blazing sun. This was organic coffee farming at the basic level. There was nothing “bulk” about the process here.

We soon found ourselves surrounded by coffee plants as Gabriel not only talked coffee, but local flora and fauna. He showed us trees and plants and butterflies and birds – and told us the names and why they were important to growing organic coffee. Everything interacted to produce better coffee without destroying the surrounding ecology. Even the horse shit baking in the sun was important.

Go here if you want to read more about organic coffee farming and processing.

This tiny group of coffee farmers near Atenas, just down the road from the giant Coopeatenas, are raising a top quality coffee without ruining their health or the health of the ground.

I guess we will tour the giant Britt Coffee processing plant at some point in time, but we won’t learn any more about coffee and how it’s grown than we did from Gabriel.

I’m convinced that we need to prune our coffee plants back, let them recover and not bear fruit for a year, and then grow them without pesticides and herbicides.

Of course, my livelihood doesn’t depend on selling coffee.

I hope El Toledo and their neighbors do well. They deserve it.