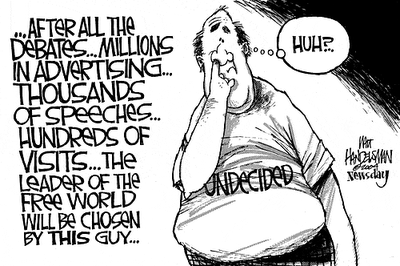 The latest Des Moines Register (a largely irrelevant Iowa newspaper) has taken a poll of cauci and found 41% are calling themselves undecided with just a few hours until they cast a ballot for a Republican candidate to run for President.

Undecided? Bloom is Right. Iowa is for Idiots.

Insular Iowa is also home to the most conservative, and, some say, wackiest congressman in America, Republican Rep. Steve King, who represents the vast western third of the state. Some of King’s doozies: calling Senator Joe McCarthy a “hero for America”; comparing illegal immigrants to stray cats that wind up on people’s porches; and praying that Supreme Court “Justice Stevens and Justice Ginsberg fall madly in love with each other and elope to Cuba.” Keith Olbermann named King not only the worst congressman in the U.S., but the Worst Person in the World six times.

So Iowa cauci can’t decide which Republican should run against The President? I guess they were so busy smoking meth and dating their hogs they didn’t have time to watch any of the debates? Too busy praying to St. Hawkeye and worshiping the oblate spheriod (football) not to watch some news – even cable news? Knob on the radio stuck on the farm report so they can’t to tune in Rush or NPR for some guidance?

Undecided? Who are these people and how can they remain so friggin’ ignorant with hours left until they caucus? Here’s a clue…

Each isolated Iowa homestead is marked off by a stand of trees (usually maples, cottonwoods, sometimes basswoods), as much windbreak as shade grove from the blazing sun. Just about everyone wears a hat; farmer’s tan is a condition every Iowan knows — a blanched forehead above a leather-cured face. Ailing windmills stand unsure next to sturdy no-nonsense homes and dilapidated peeling-red barns, often with freshly tilled beds of Black-eyed Susans or gladiolas in front.

“As the breathless, panting political class turns its eager eyes to Iowa, every sane American needs to step back and ask the obvious question: Is this any way to pick a president? Our country is essentially coming to a halt to watch what 120,000 idiosyncratic voters in an idiosyncratic state do.”

Idiots is the term I use.