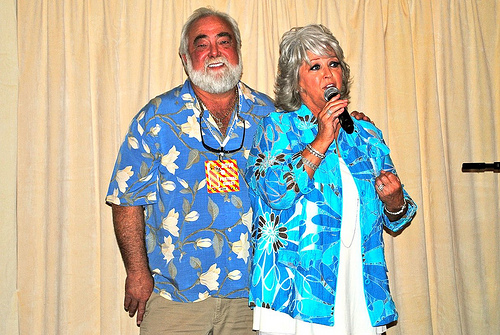 Celebrity chef Anthony Bourdain has called her  “the worst, most dangerous person to America,” and said she should “think twice before telling an already obese nation that it’s OK to eat food that is killing us.” When she released her kids cookbook, Barbara Walters confronted her about why she’s willing to promote a diet that’s clearly connected to childhood obesity. Maya Goodwin and Jocelyn Greer‘s website, PAULADEENISMS, is entirely devoted to calling out her unhealthy recipes.

Paula Deen has diabetes, but she has parlayed her disease into a multimillion dollar deal with Novartis, the maker of Galvus, a drug for diabetics.  If her the picture above is any indication, she better watch out that her ex doesn’t sue her for some of those millions.

Is there such a thing as second-hand fat?  I guess if your spouse shoves enough sugar and fat in front of you, some lawyer can make the case that he is a victim.

Deen will come clean how her lifestyle is killing her.

The Daily reports that Deen, known for fat-laden dishes such as deep-fried, bacon-wrapped macaroni and cheese, is on the cusp of spilling the refried beans about her condition. Last year, the National Enquirer wrote that Deen had the condition…

She’s apparently taken a year to land the deal with Novartis before she announces her Type 2 Diabetes.

Sweet. Gotta give the woman credit for making Fried Lemonade out of Lemons.