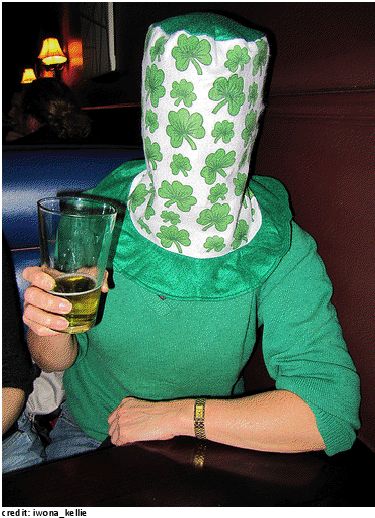 For Kevin and Trish who will leave Costa Rica for a few weeks to soak (literally) in Ireland.

BTW: here’s the proper way to order your Guinness.

Many people are very quick to stereotype Dubliners and the Irish in general. In the same way that the Scottish, Scousers and Cockneys have to endure jokes about their culture and homeland, the Irish hold their heads high and endure the endless digs. It would be wise to note however, that there are a few things that are better avoided in an attempt to poke fun at the Emerald Isle and its people. Below I have devised a list which will hopefully keep you out of trouble and firmly on the right side of the line, without the temptation to cross it at any point.

Do not attempt Irish dancing while being sick

The Irish are known for their drinking and dancing and many hardcore Irishmen can do both, at the same time with their eyes closed. Anyone not extremely experienced however should not bother because, as well as ending up very messy, there is a risk of insulting everyone who is in the pub.

Englishmen know the feeling, it rains there a lot too. But if lucky enough to be residing somewhere where it doesn’t rain every half hour try not to gloat too much.

Commenting on how pale people are

Apparently this happens a lot and may be something to do with the lack of sunshine, amount of clouds and rain they get in Ireland. See above.

Do not talk about the war

This applies in Ireland as much as it does in Britain. The words ‘civil war’ will make it far worse.

Yes, they drink a lot, namely Guinness, which is much loved in the pubs. To watch the Irish in the pub on a Saturday afternoon could be classed as watching some kind of anatomical miracle take place, as by 6pm they are still alive. However, impressive as this is, do not question it.

Do not drink Guinness before it has settled

A pint should take just over a minute to settle. The Irish expect you sit back and look at the aesthetically pleasing drink rather than gulp it down straight away.

As mentioned above, the Irish like their booze so do not waste the bar staff’s time by ordering poxy glasses of water. It will not be appreciated and you may be asked to leave.

Do not ask the way to the Leprechauns

For some strange reason they take offense to this so better not to ask.

Acting surprised when you realize there is Internet/ television/ phonelines in Ireland.

Even though non Irish people consider Ireland close to being a third world country it is best not to admit it. They have had all of above for at least a year now…

Something subtle is normally ok but a huge hat, or full on costume eg. Leprechaun is not ok. Neither is painting faces green to go with the hat.

Do not try and pay the bus driver with the Irish Pound (while holding up the bus queue.

The Euro was introduced in 2002. Funnily enough they expect this currency to be used now.

Do not ask when the Euro superseded the Irish Pound (while holding up a now longer bus queue).

The bus driver may be very angry at this point and there is the possibility of being thrown off.

It has been shoved down the Irish’s throats ever since it started and the country is now slightly fed up of it.

If you’re planning on visiting the Emerald Isle and looking for hotels in Ireland, then visit GoIreland.com for a range of hotels and B&B’s throughout the country.