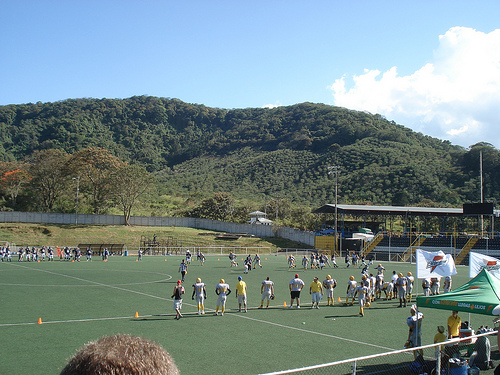 Ever since he started coaching and playing North American football we get stopped everywhere we go by people who want to shake his hand, “Hey, you’re that football guy!” We’re walking through the mall and people nod at him, “Hey, Coach!” We’re waiting for a pizza and there’s some old man to say, “I saw your team playing in La Sabana.” He’s at the DMV and the girl behind the desk is all, “Don’t you play for the Rhynos?”

I guess you could call him kind of… notorious.

Just this morning I was stopped by the guard at my kids school and he said, “Eres la esposa del Gigante Barbudo, verdad?!” (You’re the wife of the Bearded Giant, right?!)

When it got around that one of the coaches for the Bulldogs is from Atenas, a bunch of us decided it would be fun to go cheer on the “home team” Bulldogs against the Toros.

None of us were expecting much. We knew it would be played on a soccer field. And we all expected the Cuty Monge Stadium to be some wooden bleachers since the field is pretty close to the heart of the capital city San Jose. And then there was the whole idea of a bunch of guys playing American style football where Soccer is the national game of choice.

Boy were we surprised. Which happens a lot. Just about the time you think you have Costa Rica figured out, it throws you a curve.

This was one of those times: true, it was played on a soccer field, but they striped off a regulation size football field. There were no yard line hash marks, but cones served indicated the ten yard increments. The stadium was a passable steel structure. No luxury boxes for sure, and the paint was peeling, but it was more than we expected.

Quality of football? It was pretty outstanding! I sure expected to see lots of dumb penalties, dropped passes, muffed kicks, and general mayhem. What we saw was a 16-14 final score that had it all. Dramatic running games, speedster ends grabbing bullet passes, giant booming punts, routine extra points, even a decent length field goal.

The Toros QB had an impressive passing game under some good defensive pressure. His completion percentage was very high we concluded. With less than two minutes to go, the Toros were on the Bulldogs 30. A field goal would have won it. O One too many attempts to move the ball closer to the goal resulted in the one interception of the game that sealed the win for the Bulldogs.

Yeah there were some weird things that proved these were amateurs – including the refs – a couple times the refs called in the side line chain gang to measure for a first down. With no yard lines or hash marks, it was unclear exactly HOW they made sure they had the chains position in the same spot ON the field as they were on the sidelines!

We couldn’t spot any totally blown calls by the refs. A couple of flags were “no-calls” after the head official conferred with the flag tosser. There were no laughable player errors. These guys had it going on!

The head official was wearing a wireless headset and did a good job of explaining – in English first, then translated – what was happening on the field, including the time remain in the quarters.

We expected some really bad American style football, what we saw was a couple of talented amateur teams squaring off on a beautiful day. One person said, if this was October back in the states, it could be a college football Saturday.

Not quite – no tailgating, no cheerleaders and no marching bands, and it was a double header (we didn’t stay for game two) – but it was a great day to spend a Saturday. 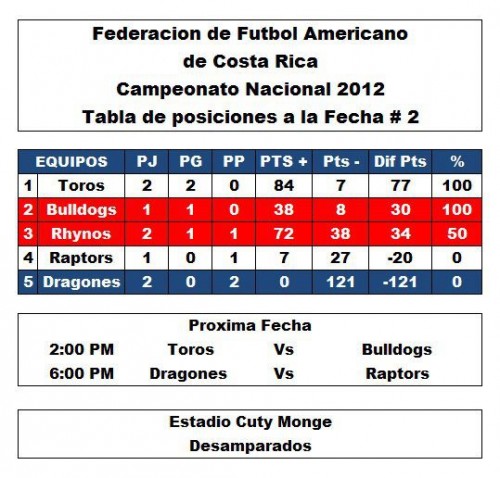