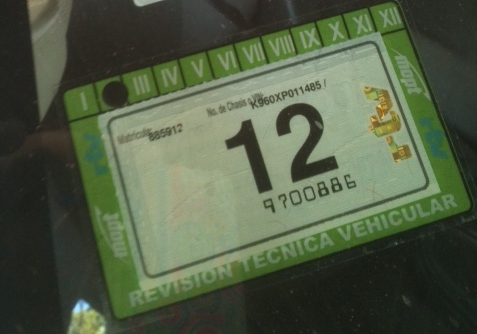 In Costa Rica motor vehicles are required to be inspected on a regular basis. It’s called the Revision Tecnica Vehicular or RTV or Retieve.

I did it today.

And the car passed.

When we bought Bessie the Beater, it had been through one (and probably many) inspections. As seen by the sticker on the windshield, the current RTV was good through the end of the month of February, 2012.

Because I was unsure of my success in getting Bessie the Beater through RTV without some major expenditures, it seemed to make sense to get her in as quickly as possible. Then if she failed, I’d have some time to remedy her failings.

I consulted with our resident expert on such matters: Bruce.

My initial plan was to hire the husband of our vet Doctora Sharon, Alejandro, who is a auto-body (not out-a-body) man to drive the car to the RTV on my behalf. I would sit quietly in the passenger seat absorbing it all.

But Bruce did such a great job explaining the process, that I figured I’d give it a go all by my lonesome. He explained that I could go online and get an appointment (!).

Gasp. It worked. On Wednesday I picked Friday 10 a.m for the Bessie-spection.  I got an immediate confirmation of my appointment which I could print and within an hour, I got a text confirming my appointment.

After reading TheRealCostaRica.com list I figured I could give Bessie the once over:

Seat Belts : You have one for each seat the belts are working properly and have no cuts or wear.

Steering Wheel : It works correctly. Does not have excessive play.

Wipers : are in good condition, operate and clean the windshield.

Polarized visors (if any): Check that the brushes do not touch.

Windshield : No cracks or ‘bull’s eyes”

Reflective : They are 2 red and reflect light at night. This is for certain high capacity passenger vehicles like tourist type vans.

Light over License Plate : Lights up and is not loose.

Brake lights : 2 lateral and 1 central, are red, they work and are in good condition.

Rear turn signals : Red, orange, no more than 4, are working and in good condition.

Directional : They’re white or orange, no more than 4, and are working and in good condition.

High and low beams : No more than 4, white or yellow color with no difference between them.Subject and in good condition.The change of high and low light work.

Halogen (if any): They are white or yellow and should not work with high beams.

Decorative lighting products you may have installed and which are prohibited by law.

Mufflers, smoke and any noise : If gasoline engine accelerates and smokes, will not pass RTV. No abnormal noises or have the air filter or carburetor modified. Muffler required.

Tires : They are smooth, no cuts, bulges and with sufficient tread.

Fenders : Secured and in good condition.

Plates : The numbers are easily read match the title.

Title:  You MUST have the original title and not a copy.

OK then… Wednesday evening Nancy and I checked Bessie out.

Front right hand turn signal was kaput. I checked the bulb and it looked OK to me.

Thursday afternoon we had to make a trip to San Jose to get Nancy’s eye freckle photographed. So Thursday morning I’m at Freddy the Mechanic’s place.

Freddy checked the bulb and it looked OK to him, so he flicked it with his finger. It blinked.

Freddy flicked it again, it stopped.

So Freddy did the Tico thing… he twisted the bulb and broke it. Then, trying to remove the socket still in the electrical fitting, he blew the fuse.

Tranquilo (no worries) Freddy had a bulb and fuse and replaced them. The bulb flickered again. Not flashing like a turn signal, but flickering like a candle in the wind (BTW: Elton John is playing in San Jose tonight.)

So Freddy wrapped the bulb socket with some electrical tape to give a snug fit and bingo: I had a right turn signal again.

Freddy gave the car his once over to check levels, added some coolant, and sent me on my way.

I arrived at the RTV early: 9:00 for a 10:00 appointment. I got in line behind three cars. When I got to the inspector he asked me for something… No Speaka Da Spanish!

Oficina! OK, got that. I missed checking in with the office.

I checked in, got a little slip of paper with my appointment time and plate number. I got back in a different line of vehicles.

Got to the inspector and she said

Pagar! OK, got that. I missed the different office where I had to pay (about $20)

Paid, got a receipt and got back in line behind three vehicles.

Soon I was inside getting the Bessie-spection.

After a visual inspection of some stuff, the inspector told me something and held up three fingers. She was standing at the passenger side. When I gave her the DAG look (Dumb Ass Gringo) she came around the the driver’s side pointed to the tach and said she wanted 3,000 rpm. So I revved her up (Bessie that is) and let her down.

Inspector lady said she needed 3,000 rpm steady… I guess they thought Bessie wasn’t warm enough. So I sat there idling at 3,000 rpm while she did the visual inspection on the car behind me.

Bessie then had the equivalent of a car-colonoscopy. They shoved a rod up the tailpipe and measured her gasses.

Then to the next station where a guy in a pit was inspecting the undercarriage. The car was on some shaker plates which gives the car a good shake side to side – with brakes on and with brakes off.

AND… PASSED! Got a new sticker and that chore is done for another year. Because the Smart car is less than five years old, that gets a two year pass. By next year I’ll have forgotten most of this and who knows what will happen.

But Bessie the Beater is now legal for another year.