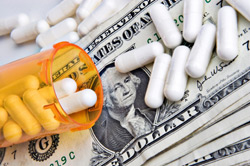 We used to order Canada drugs.  Now instead of getting our over the counter drugs  and prescription drugs from Canada, we will be using the Costa Rica drug supplier.

No longer will we have the chance to buy lipitor  from Canada. Costa Rica frowns on shipping drugs into the country. Drugs for humans that is. Doggie drugs are no problemo.

I may try to convince them that the lipitor is for the perros, but those customs guys are pretty smart.  We have had two shipments that have come by mail re-routed to San Jose so the customs dudes could open and inspect the packages.

One was a bunch of pill pockets from Drs. Foster and Smith. Customs decided this was treats for the dogs and let them through with only a small duty attached.  (Or maybe it was a handling fee, who knows?)

The other time was when I bought a back-up CPAP. The customs inspector opened the box and asked if it was a camera !  Luckily the instruction manual had a Spanish translation which I pointed out to him.

He didn’t have a clue. So I opened up the CPAP case and showed him the tube and the mask and did a deep breathing exercise.

He nodded, repacked the CPAP and sent me to the other window to pay a small fee. He didn’t have a clue.

Drugs from Canada aren’t on our radar anymore, but our prescription drugs in Costa Rica are free – some of them, if they have the correct dosage.