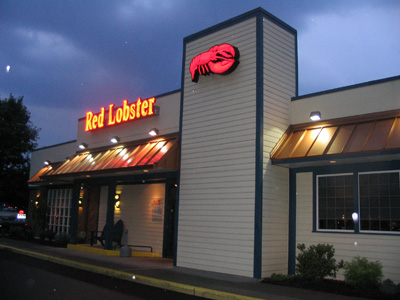 I once was a small town restaurant reviewer for the local newspaper.

The hipsters have been pretty brutal to a woman who does the same thing for the Grand Forks Herald in Grand Forks North Dakota.

“Here’s a sentence I never expected to type: You should really read the Grand Forks Herald’s review of The Olive Garden.”

She then explained how uncool you would be if you ever set foot inside Olive Garden or Red Lobster. Admitting however that her high school graduation dinner was at Applebee’s.

Gawker chose to excerpt from the review and spinning it with snark.

But the reviewer stuck to her guns because the opening of Olive Garden in small town America is a big deal.

When Nancy and I moved to Bowling Green (same size as Grand Forks) we decided that every Friday night we would try a different restaurant as a way to get acquainted with the community.

After twenty or thirty Friday nights I found myself observing things that I thought others might be interested in knowing. About the same time, the newspaper’s Lifestyles section was undergoing a revamp. I approached the editor about writing a local restaurant review anonymously.

I wanted it to be anonymous because I didn’t want to take the shit that reviewers take. I didn’t get paid, but it was a free dinner because the newspaper paid.

I never got to review Olive Garden. It was closed and converted into a Smokey Bones restaurant before I got to it.

But I did review Red Lobster…

The Red Lobster cheddar bread that starts off every meal is superb. Light, flaky biscuits are baked until golden and lightly flavored with cheddar cheese. It makes for melt-in-your-mouth munching while waiting for the entre.We chose the citrus shrimp in a bag and basil-infused halibut with a dozen barbecue shrimp. What a great variety of flavors in a few dishes!

I reviewed everything from Red Lobster to Judy’s Castle.

The restaurant review column was pretty popular with readers. Not many knew for sure that I was the writer, but I heard from many who did know that it was their favorite thing to read on Thursdays.

Like Marilyn, I was passive-aggressive toward the restaurants. I certainly wasn’t qualified to pass judgement on the quality of the food. To what would I compare each restaurant?

I am no gourmet. We were just an average couple going out on a Friday night to enjoy a local restaurant.

It had been a while since we had been out to dinner with our friends, and we had a lot of catching up to do. We wanted a place for a nice dinner in pleasant surroundings where we could carry on a conversation. The Brickyard Cafe met all those requirements very nicely. Dont let the cafe in the name confuse you; don’t think coffeehouse.

Busier than a buffet on Mothers Day that’s going to be my new saying if I get really busy.

The advertising department hated the reviews. In every review, a manager or owner could find something they would construe as “negative.” And they would focus on that one opinion. The advertising rep always took the heat for what I wrote.

Restaurant owners/managers never were happy that this was an opinion piece. They demanded to know my qualifications to write such a column.

“I eat in restaurants” was my standard reply. No more, no less.

Only one local restaurant owner came after me with a vengeance. He was a long time resident of the community and knew that I was the reviewer. In a nutshell, he said I lied when I wrote about the poor service in his restaurant. How did he come to this conclusion? He asked his staff!

Yes, he asked his staff if they gave me bad service.

He is now embroiled in a financial mess in connection with his businesses.

Nothing passive-aggressive about this opinion:

Could not have happened to a more deserving guy.

I finally quit writing after I had been to the same restaurants 2-3 times. Add that to the fact that I had gained forty pounds and my blood pressure was skyrocketing, it was time.