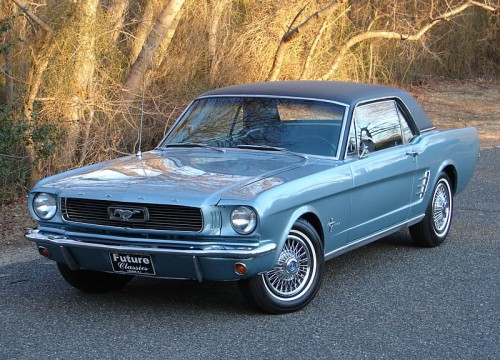 You remember New Coke, the soft drink that was gonna snag market share away from Pepsi. Instead New Coke hacked off a lot of loyal Coke drinkers and market share plummeted so badly that Coke brought back the old formula.

Ford is gonna pull the same stunt with the iconic Mustang brand.

Nancy’s first car was a 1966 Mustang. Like the one above, six cylinder automatic. She bought it with her own moola.

Her dad had a fit when the first weekend she went through $30 worth of gas (at 17 cents a gallon.)

Mustangs were wildly popular when it was launched in 1965.

Probably at the 50th anniversary of Mustang, 2015, Ford will piss off many loyal Mustang owners in an attempt to be relevant to a younger demographic — who don’t buy cars!

Targeting Baby Boomers with cars has lost it’s luster at Ford, while the rest of the marketing world is hitting the Baby Boomer demographic hard with new products and solutions.

The Wall Street Journal reports that Ford is working on a significant design overhaul for its signature Mustang that will see the next iteration keep the classic shark-nosed grille and round headlights but adopt an overall look closer to that of the new Ford Fusion.

“You cannot sustain sales without looking for new buyers. True, you are going to lose sales, but you need to refresh the population of buyers,”

“True you are going to lose sales”

A classic strategic vision if I’ve ever read one. Imagine how THAT meeting went down…

OK guys, you need to redesign a car that has been selling at an acceptable clip for fifty years. Never mind that there are thousands of Mustang Clubs around the world that are so in love with the brand they will buy two or three or more Mustangs. Forget those guys. Let’s focus on the people WHO DON”T BUY CARS.

Exactly! The kind of car buyer that may will buy more than one Mustang – or keep updating his Pony every year or so.

Are you ready for a Mustang EV or hybrid, chocked full of accessories that do not improve performance?  iPhones and iPads and social networking sites like Facebook and Twitter?

Driving itself has become a lower priority for younger people with a 2011 study by the University of Michigan finding that just 65 per cent of 18-year-olds had their driver’s license  in 2008, down from 80 per cent in 1983.

The last rear-wheel drive Ford made in the US is the Mustang. (no more Crown Vics or Lincoln Town Cars.)

Soon the last rear-wheel CAR made in the US will be the Corvette.

Unless GM hires Strategic Vision to kill that brand too.