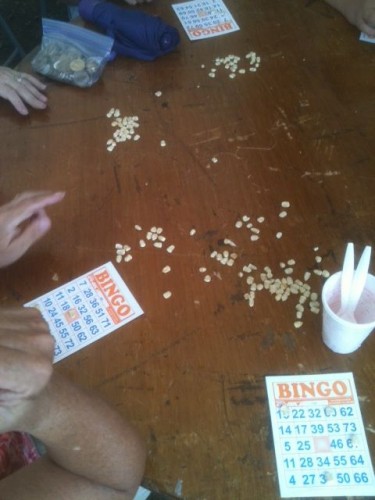 As Bulbous pointed out: We are not old enough to be regulars on the bingo circuit. But one evening we passed by the school as the bingo game was breaking up and we commented that it might be kind of fun to do bingo.

We got the chance Saturday afternoon as Pat invited us to go with them to the church in their neighborhood to play bingo.

Since Pat is fluent, she promised she would help with the numbers.

Did you know Bingo callers have their own lingo when it comes to numbers? I think I knew that from U.S. bingo games… or maybe something I’ve seen on the big number program on the satellite teevee.

The caller in Atenas liked “solito” before the single digit numbers and “redondo” before 20, 30, 40, etc. (the round one.) That’s about it except for hyping the cards for the big screen teevee and the refrigerator prizes (which didn’t exist.)  The prizes were donated by parishioners and were in the category of a dozen fresh eggs, etc.

Yaddi, the best waitress in Atenas, told us that where her Mother lives the caller sings the numbers!  Now that would be cool.

We found our way to the church about 2:30 and they had already played a few games. Which is pretty remarkable because it seems that nothing in Costa Rica starts on time. The scheduled start time was 2 p.m., so the gambling bug must have bitten pretty hard for them to be rolling within 30 minutes.

Everybody was huddled around tables under big tents with a card or two in front of them. No big multi-card players here like in the states. Two seemed to be the max. Each card costs the equivalent of fifty cents.  Some used plastic discs for markers, but most used the corn kernals as we did. They provide the corn.

Bingo?  Nope. Buena! is the call when the numbers are covered correctly.

And after the card is checked the caller would say… Esta Buena!

Nobody – out of six at our table – Buena‘d. Nada. Zilch. Pfffbbt. We must have played 100 games and we changed cards and we changed corn, I even played standing up once…all the tricks of the Bingo trade.

Hmmmmmm. Just had a thought. Bribery is supposedly the way of the world here. Wonder if that applied to church bingo? May give that a try next time.