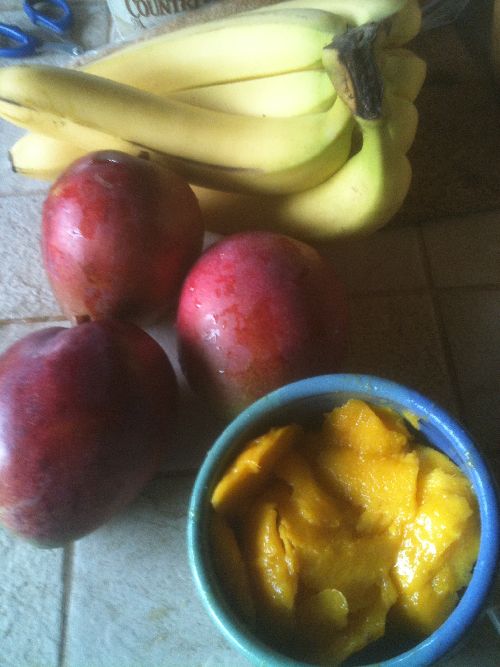 OK, OK, first you lean a ladder up against an Irwin Mango tree… what I should have said was how to “choose” an Irwin Mango after somebody has already picked them.

I wasn’t a mango fan until I was introduced by Clara to the Irwin Mango. They have a grove of mango trees including a few Irwin Mango trees just down the road from us. When they had us for breakfast, Clara insisted we try their Irwin Mangos.

They are delish and I am officially hooked on them. They are in season now and four mangos weigh about two kilos which sell for a “mil” (one thousand colones – about $2) at the local feria. Just a little further down the road from Clara’s grove, near Orotina, we saw them even cheaper. (Orotina calls themselves the “fruit capital” of Costa Rica.)

The original ‘Irwin’ tree was a seedling of the ‘Lippens’ cultivar that was open-cross pollinated with ‘Haden’, planted on the property of F.D. Irwin in Miami, Florida in 1939. The tree first bore fruit in 1945 and was named and described in 1949. The fruit gained commercial acceptance due to its good production, flavor, relative disease resistance, and attractive color. ‘Irwin’ has also been sold as a nursery stock tree for home growing in Florida.

My first venture at picking out mangoes home was a typical gringo move: I asked the street vendor to give me two kilos. He stuck me with a bad mango. The tico increased his profit because of my ignorance.

Wasn’t the first time. Won’t be the last.

Now I know how to pick out good mango and I am flush with bravado as I stroll up to the vendors in the market and start poking and squeezing their mangoes.

(insert your own filthy joke here)

Irwin Mangoes have a monster seed, so that one softball mango will yield one normal size serving. I always peel two. Warning: you may notice some juice leakage from the unpeeled mango from the stem. Clara says this will stain clothing. Otherwise the mangoes are a juicy delight. If you are peel and eat fan like I am, be sure you have a place where the drips can fall unrestricted. I like to stand on the pool pump house and let the juice drip off my elbows. 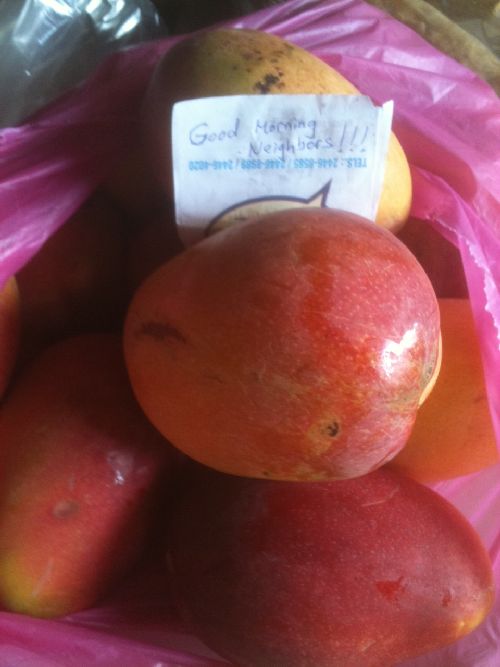 Nancy was up bright and early this morning (Saturday), but didn’t investigate when Derby charged out of the house at 7 a.m. barking up a storm.

Too bad! Clara had stopped by with a bag full of fresh-picked-from-her-trees Irwin Mangoes.

Clara told me later that the season was about to end, but she was hopeful for a second season this year about August.

It’s nice to have nice neighbors. (The note inside said Good Morning Neighbors!)