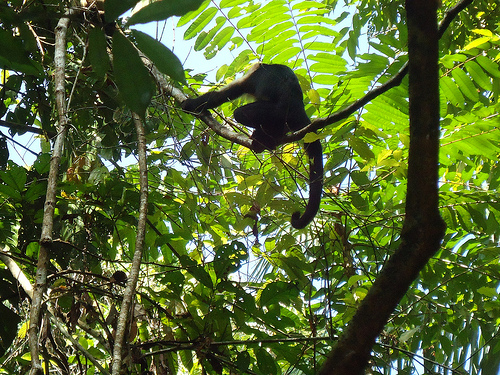 Wow, that was sooo NOT fun.

Jonny offered to babysit the pooches so we could have a little getaway. We haven’t done any real sight-seeing of all the typical tourist spots since we moved.

We decided that since Manuel Antonio National Park, one of Forbes 12 best in the Frigging World, was worthy of a trip. Its only a couple hours away too.

After getting a recommendation from a local gringa on a place to stay we headed out Tuesday, May 1, the Labor Day Holiday in Costa Rica.

We arrived at Velabar Hotel just in time for the afternoon showers.

Velabar is not what I had hoped for. It’s old. We’ve stayed at old before without problem. Old is not the issue. No maintenance was the issue. I purposely upgraded to an air conditioned room because I knew it was gonna be hot and humid on the beach. The a/c control didn’t work.

The a/c pumped out chilled air at full blast. Only the bedroom had a/c. So sleeping was fitful as I woke up cold, turned the a/c off, then woke up hot and turned the a/c back on throughout the night.

And what is it about uncomfortable furniture in Costa Rica? Christ on Crutches, we had only one rocker that didn’t just KILL my back. AND the bed was typical Costa Rica… a mattress on top of some wooden slats. I’ve eaten larger marshmallows than the pillows.

Wednesday morning we walked to the entrance to the park. This was a nice advantage to Velabar. Off street parking and within easy walking distance to the park entrance.

We entered about 8:30 and were out by 10:00. I hate to be jaundiced, but when you’ve seen one tropical rain forest jungle you’ve seen them all. We’ve seen monkeys in the wild near our house and Toucan’s in our trees, and iguanas by the pool.

Our tour guide in Belize Maruba Resort did a fantastic job of explaining all the flora and fauna.

It was damn humid. I was dying because there wasn’t a breath of air and we weren’t seeing anything new.

We left, had a late breakfast and hit the beach where at least every once in a while there was a cool breeze. Enjoyed watching the surfers.

Early afternoon, we headed back to the room to nap and struggle with the a/c controls. A guy showed up with a new controller which worked.

After nap time, we took and early-bird dinner because we skipped lunch. We ate at Marlin’s Restaurant on the Manuel Antonio beach. Nancy had Mahi Mahi (or so they claimed) and I had two Burritos.

Later that night she was up barfing.

Since when is a continental breakfast two slices of toast, butter, marmalade and juice?

What a gyp. In the land of fruit, there wasn’t a fruit slice to be found.

Next door was a place that served a pancake, scrambled eggs, coffee and fruit plate for $4.

We checked out, piled into the car and headed to Linea Vital, the local emergency room, because Nancy gets dehydrated when she barfs a lot.

That was no NOT fun.

UPATE: We picked Velabar because there was a restaurant attached. It was closed the day we arrived. A casserole was C18,500. WiFi was sketchy at best, no ICE cell service, but that may have been due to the Labor Day holiday.