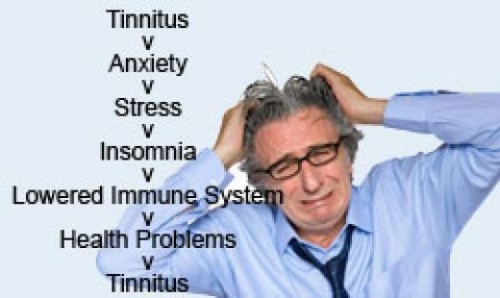 It’s quiet where I live.

All I can hear is the ringing in my ears from the Tinnitus.

A guy wrote to Salon.com about his loss of hearing.  He started losing his hearing at age 17 and now it’s 15 years later and …

It’s starting to affect my life in little ways: hearing aids, not being able to watch television or movies without captions, missing things, getting names wrong, not hearing the timer or the kettle boiling.

He asks the normal-hearing columnist for advice.

The columnist makes a glaring error: he assumes the man is going deaf. When in fact, he is losing his hearing because of ringing in the ears: Tinnitus.

One doesn’t go deaf from Tinnitus unless still subjected to the cause. This ignorance is understandable. But it’s still ignorance.

His response, to someone who has a health problem, is the saddest I’ve ever read :

But you can’t argue with this kind of statement. I can only illustrate how ludicrous it is… one can make the same statement about any human condition.

Nothing is World War II. That was man against man to the death to protect a principle.

The man’s plea for understanding was met with a dismissal and some pity.

Things you don’t think about when you are a hearing person: I was sitting here typing and heard my wife come in and start doing stuff behind me and I spoke to her without turning around and she answered. We had a conversation without looking at each other and didn’t even realize how amazing it is to be able to do that. (I guess you could say the ability to hear is a gift.)

Yes, being able to have a conversation without looking somebody in the face would be a pleasure, but an even bigger pleasure would be able to enjoy some quiet time.

Those of use suffering from Tinnitus loath quiet time. We do things to prevent quietness. We appreciate the hum of an air conditioner, the buzz of an overhead light, the whine of trucks in the distance, rain beating on the roof…

There is no cure for Tinnitus. Hearing aids sometimes are recommended for masking purposes. In theory they should amplify native sound to mask the sound your brain thinks it’s hearing. They seldom work.

The columnist offers another bit of advice:

… And you will need to educate your current friends about, say, not talking to you with their backs turned.

For somebody of the age of the letter writer, it might work because it would be an abnormal condition that friends and family will show sympathy toward.

It adds to the stereotype.

Old white guys that can’t get it up or hear or remember anything.

Most people make jokes about those guys. The writer cites these tidbits

Nice. Hope you deal successfully with your cancer. After all, it’s not World War II.

Here, put this on a loop and walk around with your earphones in for just one hour and let me know your feelings.

UPDATE: This could be next big NFL health-related lawsuit. I hope so.

The Seattle Seahawks, who boast that their fans caused a small earthquake after a 2011 touchdown, acclaimed their crowd’s record 136.6-decibel noise level this September after an effort orchestrated by the fan group Volume 12.

Four weeks later, the Kansas City Chiefs — who are still unbeaten — topped the record, in part because of a scream-a-thon organized by the fan group Terrorhead Returns.

“Be LOUD AND PROUD and blow my eardrums out!” one Chiefs fan wrote on Facebook.

The N.F.L. encourages the din.