Ambassador Andrews invited me to her shindig at the Children’s Museum in San Jose.

1. The Effin’ Car engine assploded or something the day before. Major dollars to repair prolly.

But then I slept on it and decided that since it was a private party by invitation only – and it was my first official duty as Warden of Atenas, Alajuela, Costa Rica, I better show up.

I borrowed a suit coat and tie from Bruce (thanks a lot pal.) 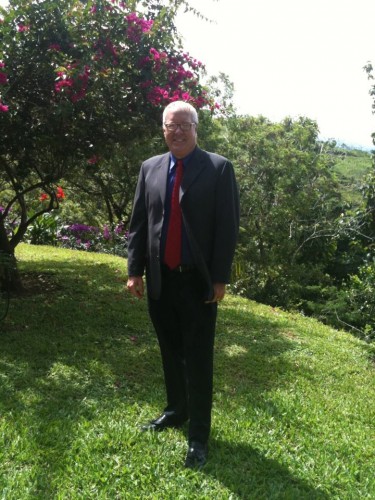 Drove myself to San Jose.

I parked on one side of town and took a cab to the other. Didn’t want to attempt to drive cross-town in San Jose during the day. I read afterwards that we passed through the red-light district of San Jose. I guess 11 a.m. is downtime (ha, pun intended) for the hookers.

What a show of force the Policia put on. They blocked the entrance, had a major tow truck there, tons of cops on foot and motorcycles and in cars. Even the guys that talk into their sleeves were there.

Arriving plenty early, I hung around outside for a bit. I noticed that two black Suburbans pulled up to the entrance. It was the ambassador and her family arriving.

I was tempted to integrate myself in her entourage, but those guys that talk into their sleeves can be intimidating. And the cops with machine guns too.

So I hung back until they cleared the security area and then I strolled in to the museum.

I checked in with the staffer and she gave me the go ahead, passed through the metal detector and then was ready to PARTY.

Eventually the ambassador and her husband were standing alone in the center of the room. I carefully made my way toward them (no sudden moves to alert the talking sleeve guys.)

“Hello, your Excellency, I’m Mark Van Patten and I bring you greetings from Indiana.”  She is Ambassador Extraordinary and Plenipotentiary and Excellency is proper protocal. Look it up.

She and her hubs were both from Indiana originally. We made small talk for a few minutes about our common Indiana connection and then I excused myself.

I parked myself by a column and watched the hundreds of Ticos arrive.

Then I spied her kids standing alone in the center of the room.

“Hello, I’ve never met a diplomat’s kid before.” The young woman extended her hand and said, “Hi, I’m Her Excellency Junior.” (Not really – she used her first name.) Nice kid. Her brother was kind of a dolt, but she was about 18 and brother was probably 15, so what’s new?

Here’s what else I saw:

I grabbed a couple sliders and washed them down with a water. A young woman passed among the crowd offering plastic fans (red, white or blue, natch) so I jammed my pockets full of the freebies and left.

Proud to be an American.

And I got some free stuff.