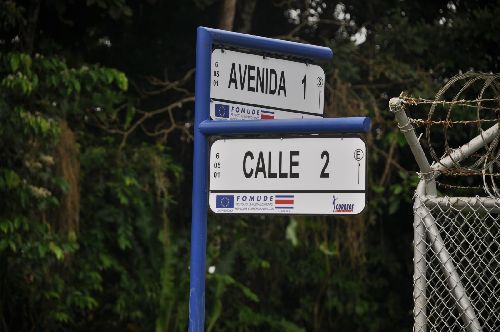 The Wall Street Journal just discovered that Costa Rica (and many other developing nations) have not a put a high value on having accurate street names and numbers.

SEVENTY-FIVE METERS WEST OF THE GENERAL CEMETERY, SAN JOSÉ, Costa Rica—Rodolfo Sancho is on a quest to end the colorful life of Costa Rica’s quirky yet costly address system, but he knows there are roadblocks ahead.

It’s a real hassle, make no mistake about it.  We’re adapting and depend a lot on GPS to get us around. But it would be nice if Costa Rica would come into the 19th century.

Far more than a hassle, it is a real problem for emergency services. There is a ton of money being wasted as people bumble around trying to find a house or business.

But the cost of not having a proper address system across the fast-growing country is a bit north of that: Carlos Nájera, who manages the country’s post offices, says Costa Rica loses $720 million a year in lost revenue and other costs, as a result.

One of my smart friends, John, has a workable, affordable solution using existing, open source technology. He outlines his plan in detail. In a nutshell, every location would be spotted using GPS coordinates. Those coordinates would be added to a QR code. Easy-peasy. Read this for details.

What about the current quaint practice fading away? and the loss of “innocence?” Here’s what John says:

Well, it has works here, sort of, and people are only satisfied with it because they have no experience with an industrial age addressing system or they wouldn’t put up with this kludge; and, yes it worked for years in the RURAL U.S. but it didn’t work once the country grew and modernized; and, I’ve never been afraid to stir the pot when I thought things needed fixing or tweaking, have I friends.

John has the framework for a plan.

If you’re a techy or venture capitalist who decides to take the plan and run with it to cure the problem of no street addresses in Costa Rica, just remember where you read it first. John has an expensive habit he needs to sustain.