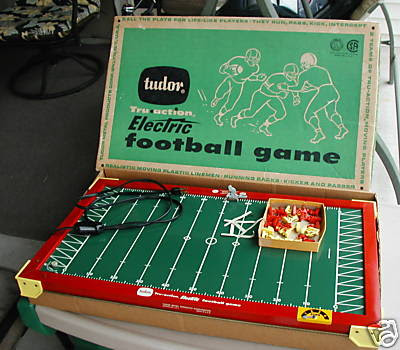 Before Madden Football video games, there was an electrifying game invented by Norman Sas.

I haven’t played the Madden Football video game, but I can guess that it is a helluva lot more fun than playing Tru Action Electric Football.

Gawd, what a frustrating toy. Right out of the box Christmas morning the intention was to play an actual game with a winner and a loser.

That lasted about five minutes.

In case you have led a sheltered life, here’s how it works:

The players were little plastic dudes with paper thin plastic thingies that protruded from the bottom of the molded plastic. Players were either lineman (in the down position) or runners (standing up with a straight arm extended.) On my set there was also an aluminum guy that had some contraption that was supposed to fling the “football.”

The “football” was a tiny piece of felt. Teeny-tiny. Itty-bitty. Eensie-weensie. You get the idea.

So you jam the “football” into your running back’s crooked arm and line up the play. Your opposition would line up the defense.

Passing? I think this is where the aluminum player with the flingy-thing was supposed to come into the picture. Something about flinging the felty thing and the first player that touched it had possession.

Norman Sas was a marketing genius because millions of these lame games were sold.

Goodbye Norman Sas. Too bad you didn’t invent a game that was fun and challenging.

Please know that there still is a cult playing your vibrating electric football game.