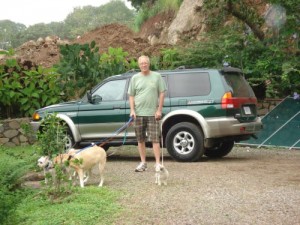 When you move to Costa Rica, don’t buy a car from a dealer with “Blessing” in his name.

I bought the Effin’ Car from Autos Blessing in Grecia.

The car had the wrong radiator. It was for a four cylinder and the engine was a six. After a week of driving and overheating. I took it back to the dud dealer and he replaced the thermostat and sent me on my way. (There is a 30 day guarantee on engine and drive train mandated by the gummit.)

That made things good until about day 60 and the overheating started again.

I took the car to Freddie, a local guy recommended by our building contractor. He said the radiator needed a new core. When he gave the VIN to the radiator guy they discovered the wrong radiator courtesy of Autos Blessing.

$800 later the correct radiator was in place and the car has worked fine for months.

So much so that I volunteered to drive Mike and Joni up the mountain for a shrimp dinner.

The next day Terri and Nancy went shopping and I got the call.

We’re at the LaGarita exit and the car has major problems.

I stopped by Freddie’s and we drove to find them. He took one listen to the engine crank and said “Expensive.”

We loaded the car on a roll-on truck and schlepped it back to his “shop” (a shack under some trees.)

There Freddie diagnosed the problem as a blown head gasket – no doubt caused by the wrong radiator being installed.

We decided that the best course of action was to rebuild the engine. He’ll buy a “long block” (for you gearheads) and install it.

I gotta think that hauling Mike and Joni up the mountain contributed.

I think I’ll bring that up to them when they are schlepping us to Grecia to celebrate the 4th of July on the 8th. Either that or hit them up for a $2000 hot dog.