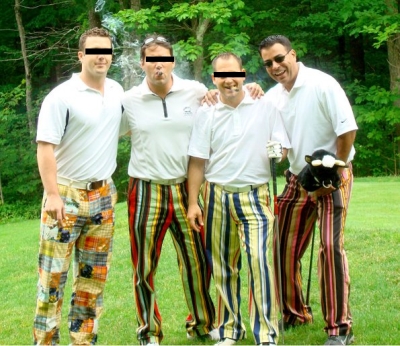 These Guys Made Me Quite

Why I Hated Playing Golf at the Local Country Club.

I got to the point where every time I spent a few hours at the country club where we belonged, I got really pissed. Not at the game, at the Golfer-Jerks.

Golf can be a frustrating game. Just listen to golfers discuss their latest round. The conversation will be full of “if onlys” and “shoulda” “woulda” and “coulda.” Golfers are the most miserable hobbyists around. Frustrated.

At least the men are.

But that’s not why I quit. I could handle the frustrations of the game. It was some of the people – the Golfer-Jerks that drove me batty.

Right now you’re probably thinking “few bad apples”… here’s the thing about joining a country club: those bad apples are on the course or in the clubhouse regularly… sometimes four, five, six times a week. Many are retired, many are self-employed, many just chose to hang out at the golf course their way of life. And they are always there on the weekend when I wanted to play.

I just couldn’t avoid them.

I’m pretty sure there are golfer-jerks everywhere.

I had some passive-aggressive ways of dealing with them. None of which were effective.

Here’s how to be a Golfer-Jerk and my passive-aggressive solution  (PAS):

Leave cigarettes and cigars butts around the greens.

PAS: I would sweep up 6 – 8 filter tips and make a nice little pile on the putting surface. Golfers HATE to have foreign objects on the putting surface – they will brush away the tiniest grains of sand to avoid having it affect the roll of their ball. I like to think the smokers in the groups playing behind us would get infuriated with my mini-monument to Cancer Sticks.

PAS: I would walk around the green and repair as many ball marks as possible without interrupting the flow of play. Note: this is only satisfying if a group of low handicappers is behind you waiting. Which is rare because high handicappers always play faster than low handicappers – even when we have to search the woods for our ball.

Cut in on twosomes. Nancy and I used to like to play a quick round of golf after work. We played fast. But invariably, a group of four Golfer-Jerks would cut in at any opening.  Within minutes, we would be standing, waiting on them.  Which leads to the next point.

PAS: We would just skip over them, cutting ahead of them. If they were putting, we would drive by and take the next tee and play on. By the time they were done putting, we were out of their range. We played fast.

PAS: Play as close to them as possible without being a Golfer Jerk yourself. As soon as they got their butts in the cart, I was firing. (Which wasn’t a problem because I never knew where my ball was going anyway.)  As soon as they cleared the green, I was firing. Often we would speed up our putting so we could reach the next tee before they left. It’s amazing how Golfer-Jerks can avoid eye-contact. It’s like we are apparations.

Play from the back tees.

The back tees are for the very best golfers. There are usually two or three sets of other tees designed to give mid-to-high handicappers less of a challenge and to speed up play. Did you know there is no such thing as “ladies tees?” I was amused that the PGA is tilting at this windmill via their “Tee It Forward” program. They are trying to get the high handicappers to move up on the tee and shorten the golf course to match their ability. This program has a fat chance of succeeding because Golfer-Jerks think it’s sissified to play from anywhere but the back tees.

Passive Aggressive Solution (PAS): Play from the shortest tees (commonly referred to as the “ladies tee.”) Especially when playing behind a slow group! Nothing frosts them more that to realize that your drive and their drives are in the same general area (because you tee’d off 100 yards ahead of where they did.)

Whoop and hollar when you make shot.

Golf is  a game of quiet solitude communing with nature, right? Not where the Golfer-Jerks are concerned. This is THEIR course and no other game matters but THEIRS. You can be standing on a tee just a few yards away and if a putt is sunk to win a quarter, they whoop and hollar as if it mattered.

PAS: I would whoop and hollar no matter what my next shot looked like. Worm burner? Woooooo hoooooooooo. Find somebody else’s ball in the deep grass when looking for mine? Yeeeeee haw.

Play in a fivesome. Or six some. Hell, I’ve even been behind eight-somes! Their rationale was “we’re playing best ball” or “were practicing for the tournament” or “we’re playing scramble.” Yeah. Right. Well then of course, you are special and should have this right.

PAS: No PAS here, it was Aggressive. I would try to hit into them. Now remember I was no good so I usually missed, but when seven guys are standing around waiting for the eighth to hit, they hear the distinct sound of club on ball coming from behind them. The didn’t know that my ball was fifty yards short of them or fifty yards left. All they knew was, I had fired away. I dared them to complain. They never did because they were playing a fivesome or sixsome or eightsome.

Take forever to read a putt. Why is it the guys that spend the most time on the course take the longest time to read a putt? They know every green like the back of their hand. They can read MY putt from 30 feet away “That will break two balls to the right.” But they agonize over a ten footer that they have seen dozens of times.

Wait on the tee for the fourth to put on his shoes in the parking lot. Nancy always insisted we have a tee time. We would arrive and three guys would be standing around staring at the wide open first hole. We would take our warm ups and putter around as long as we could. Usually (not always) someone would say: “Joe is in the parking lot putting on his shoes, we’ll be out of your way in a minute.” (Of course it never was a minute, and they assumed that four guys could get away from a man and wife twosome. Never happened.)

Most of those behaviors are seen on the course, but there Golfer-Jerks take their habits off the course too.

Parking in No Parking areas. I love the look of a golf course. The grass is usually lush and green. Nothing prettier than a golf course in the setting sun. So why do some Golfer-Jerks park on the grass? I can’t tell you the number of times we pulled into the 90% empty lot next to the cart shed and have seen a car PARKED ON THE GRASS.

PAS: Leave a nice note… I like grass, please don’t cover it up with your car.”

The entrance to Indian Hills was very nice and the designers left some wide driveways to make it seem inviting. Another favorite place for the Golfer-Jerks to park was as close to the front door as possible.

Spitting tobacco on the patio. Yeah, it happened often. The back patio facing the course was spotted with spit stains.

PAS: I would fart in their general direction.

You’re thinking… where is the professional or club manager? Why don’t they act/react? Because they don’t want to piss of their best customers: the guys that are spending their lives at the club eating and drinking. Never mind that for every one of those guys, there are four other guys like me that would spend more time on the course and in the clubhouse if it wasn’t for the frustration of dealing with the Golfer-Jerks.

I hate it that I let them win and force me away from the game.