Read today that some charity car donations are getting scammed.

Both were my father’s Oldsmobiles.

My dad was an Oldsmobile-o-phile ever since he won his first in 1938. The only time he deviated from buying Oldsmobile,  was in 1956 when he decided to haul us overland to the left coast.

He thought a station wagon would be the best vehicle. Olds didn’t make a station wagon that year, so he settled for a Dodge. Never again, he spent the rest of his life buying Oldsmobiles and driving them ’til the wheels fell off.

When Dad was ready to trade one year, we needed another car, so he agreed to sell the car he was going to trade in to us.

A land yacht if there ever was one. I’m pretty sure this is the car… maybe… 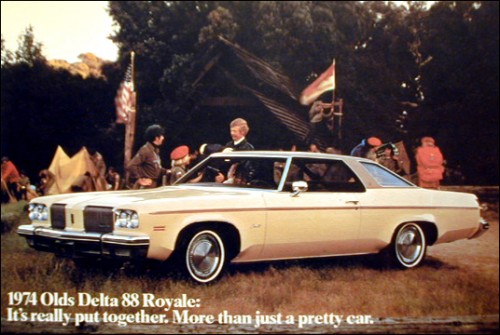 Our youngest drove it back and forth to school. She had a love/hate relationship. Love having a car, hated driving a land yacht. She drove it in the ditch once which we didn’t get fixed and eventually it got in such bad shape it was time to retire it.

Rather than scrap it out, we donated it to the United Way for Wabash County, Indiana. They had a charity golf tournament and this was the “hit-it-you-git-it” car. Parked it next to the green on a par three and if anybody’s tee shot hit the car, it was theirs to tow home. A teen-ager spent 11 shots trying to hit the car! He eventually was successful and we would see it tooling around town after he made some repairs.

The second car we donated was my fathers 1998 Oldsmobile  (see the trend?) This car had been through a tornadic hail storm. There wasn’t a spot on this car that didn’t have damage. Most of it cosmetic, but it was a lumpy bumpy mess.

This is the last car Dad drove. He decided to hang up the keys and we promised him his car would go to a good home. We donated it to a local agency who gave it to a grandmother to drive her grandkids around. She was raising a half dozen of them because the parents were no good.

When we left Kentucky in 2011, this car was still motoring around. The body had not been touched. As a matter of fact a few of the trim parts had fallen off and the car was in bad need of alignment (coming at you, it looked like it was moving sideways.)

With the luck we’ve had lately with cars, I sure which I had either one of these cars back.