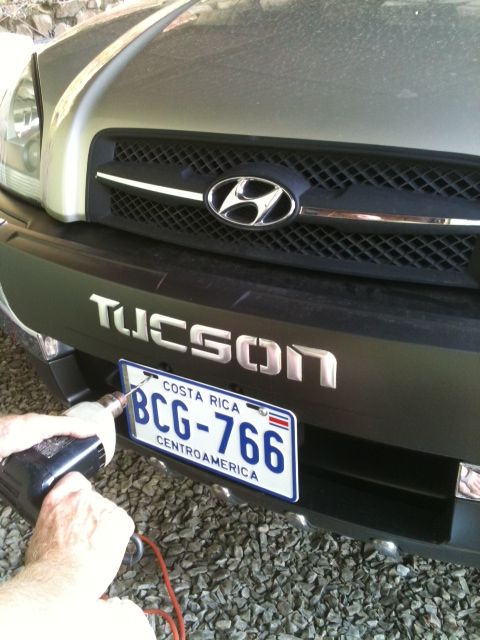 Costa Rica makes it tough to be a pacesetter.

We got the new license plates that were recently issued by Costa Rica.  Until recently Costa Rica car plates were six numbers, no letters. Because the plates stay with the car forever, they ran out of numbers.

Thus, the new plates have letters and numbers.  The plates also have a security stripe on the left side and a corresponding sticker which goes on the windshield to match the plate number.

Problemo Uno: The holes in the car didn’t match up with the hole slots on the plate. Drill a hole in plastic, install plate.  At least it wasn’t steel bumper like in the olden days.

Problemo Dos: The sticker for the windshield has a security feature to prevent tampering – stealing the plates and stealing the sticker that matches. Makes sense. (This is the third sticker on the windshield required by the gummit. Another one is a tax sticker and the other is a car inspection sticker.)

They do love their stamps and stickers here!

So check out the instructions for affixing the sticker to the glass: 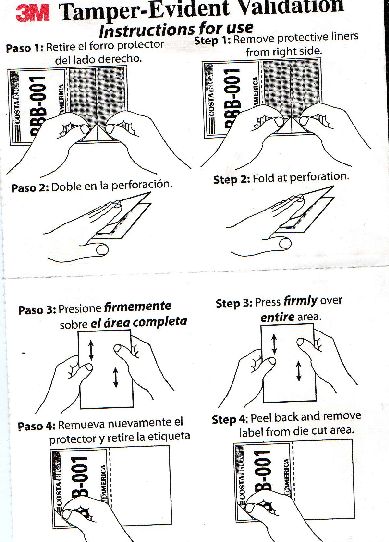 I hope they wanted it affixed to the windshield, and aren’t picky where on the windshield it goes. No mention of that in the instructions.

But notice, those of you in the U.S. who resent directions printed in any other language than English, they took pity on us Gringos and at least printed the instructions in English too.

I sent Nancy out first to test my application. Hope the gendarmes don’t object.  She doesn’t like to be a pacesetter. She would rather have me handle it.