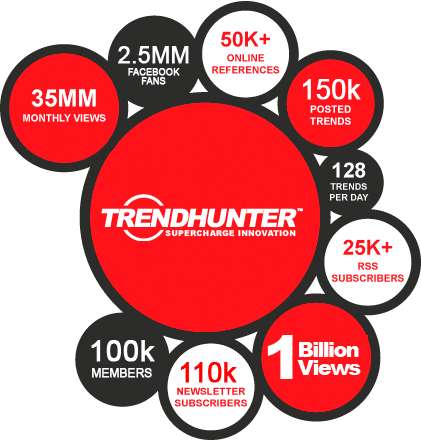 As they like to say on the teevee… that’s “billion with a B.”

I currently am ranked the seventh among Top Trend Hunters. But since I stopped writing for them quite a while ago, my ranking is dropping – not like a rock, but dropping.

Only a few writers for Trend Hunter were there during the early days. I was one of them. And it was a blast.

Jeremy Gutsche started TrendHunter.com when he was banker.  He worked for Capitol One in their upmarket division. But he was an innovator.

I would describe myself as enthusiastic, creative and social.  My friends would describe me as hyperactive, short attention spanned and easily distracted. (Mom, this is my attempt at humor.)

A cowboy entrepreneur at heart, I grew up riding dirt bikes and ski racing just outside Calgary, Alberta, home of the Wild West and the legendary Calgary Stampede.  I’m the son of a psychotherapist and a venture capitalist; the younger brother of an art historian.  Perhaps I ended up somewhere in the middle of the three After all, I really like new ventures, meeting new people and artistic creativity.

I’d come home from work, teach myself to code, and work until 3 or 4 in the morning (pretty much every day).

In addition, he has a successful speaking career which spans the globe!

I’m most in the zone when performing keynotes on stage. I fear that many presenters are skilled academics or managers who lack the entertainment fuel needed to spark a revolution.  So this is what I aspire to deliver.  I like to think of my performances as a mixture of stand-up comedy, audience interaction, big ideas and talking in a really loud voice.  I love multimedia presentations and I draw my own animated stick men. Always.

The man is a dynamo! And a pageview genius. Take a look at the graphics heavy site and marvel at how quickly it loads. Jeremy has a coding team now, but he is still the driving force behind making it all work I’m sure.

I can’t remember how I found Trendhunter.com, but I sent off an email applying to write for them. I soon heard back from Bianca inviting me to start writing for them.

Whoa. Be careful what you ask for.

I was a total rookie writing for a website that thrived on Search Engine Optimization (SEO.)  But Jeremy was the wizard at SEO and he had a clearly defined plan for getting the Google Juice that made it possible for Trend Hunter reach a billion page views last night.  Bianca would patiently hold my hand (virtually) and edit my submissions to make sure they were successfully juiced.

At the same time, she was also writing stories for Trend Hunter.

And at the same time, laughing a lot.

I think they both worked day and night.

We had a lot of fun. We IMd at all hours of the day (so long ago it was before Facebook.) We had a LOT of fun. The best kind: goofy fun. eg: Jeremy had the idea that it would be cool to have Trend Hunters send it pictures of there Trend Hunting space. I sent him a picture of my back hunched over the computer wearing a Trend Hunter tee shirt I designed decked out in bunny ears. He loved it.

And from the looks of the site, they still are having fun. It takes a special leader to keep up a high-energy team of young people who are looking for the trendiest of material.

I quit writing for Trend Hunter because the compensation program changed (which wasn’t totally in Jeremy’s control.) He now leads a team of ever-changing interns.

I still have the record for the most stories published in a 24 hour period.

It will be unmatched.

I once wrote Sixty stories that were published in a 24 hour period.

There is a “but”… that was in the early days when stories were held and only published twice a day. Now, as soon as a story is written and edited it’s published. 24/7/365.

Don’t be impressed… Bianca, who is no longer working at Trend Hunter full time, has written almost 5,000 stories earning over 43 million page views. 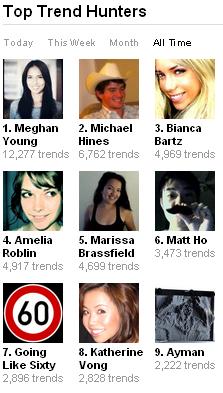 Here’s an “inside baseball” tidbit… Jeremy suggested the logo for Going Like Sixty. Obviously a mug shot of a sixty year old guy is not the best choice for a site that appeals to the 18-24 demo.

I wasn’t crazy about it at the time because the logo is based on the speed limit signs in the UK. But it worked.

I lived vicariously through Jeremy and Bianca’s work and play.  They were kind enough to let me lurk in their online life (and a little bit of their personal lives.)

A billion pageviews. From basically a one man operation.

It will never happen again.

Update: I still got it… when I looked at Trend Hunter after writing this lookie: 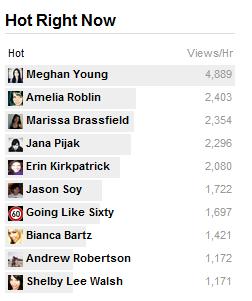