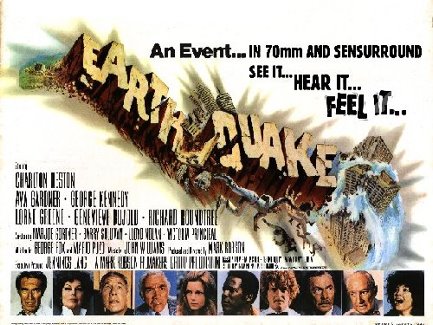 After a year of living in Costa Rica, the land of many quakes, we felt our first.

It was a doozy.

Thus, we felt it.

There have been many many small quakes that have shaken our friends living within a few miles of us. But we have decided that we landed on a very sturdy mountain – or a very jellyful mountain. At any rate our mountain either

When the 7.6 quake hit this morning, Nancy was in the bedroom and I was outside pulling weeds. There was NO DOUBT this was a big one. If WE felt it, it was big.

For those of you who live around quakes, this was one of the rollie-pollie quakes. Not a jolter. As I was reaching into the drain to pull out a handful of weeds, the roll started.

We’ve experienced small SoCal quakes. The ones that feel like some giant fatty is tromping down the hall in a unstrudy building. The floor shakes. Those kind.

This was our first where the earth moved. Now that is freaky. It lasted only long enough to make me positive that I was feeling a quake. About ten seconds of good vibrations. By that time, Nancy had made her way to the door to ask:

Did you feel THAT?

You know how in the movie Earthquake all the dogs sounded the alarm?

None of our three let out a woof or whimper.

We have lots of shelves with tall stuff – vases and pottery. Nothing moved. We have friends who have lost “stuff” due to breakage. The water didn’t even slop out of the pool.

About the only difference I can see in the house is the mirror on the bathroom wall is about a half a bubble off.

But it may have been that way yesterday.

So we did the major earthquake shakin’ – we can check that off our list.

I called our house contractor and thanked him for putting all that rebar in the construction. Seemed like overkill at the time, but today? not so much.

UPDATE: We had a subduction of the Cocos plate.