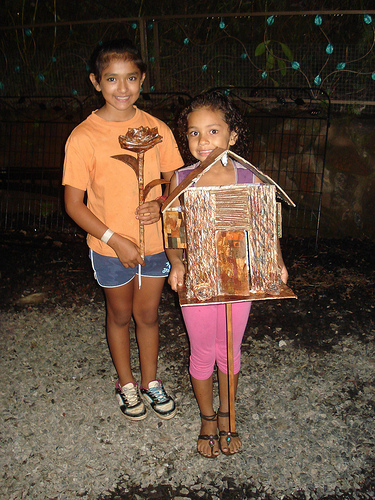 I’m pretty sure on more than one occasion today, I wished the Ticos in Atenas, “Happy Day of Beans.”

Kind as if the old country took the “one if by land, two if by sea” and made it a big party.

Tomorrow is Independence Day in Costa Rica, but the festivities have begun. Just like in the old country, the day before the Fourth of July is becoming a day of celebration too.

Although some historians are seeking to move independence day to Oct. 29, that idea has not met with public favor. The historians argue that Costa Ricans did not learn about the freedom from Spanish rule until weeks after the Captaincy-general of Guatemala proclaimed its independence from Spain. That was Sept. 15, 1821.

Maricela made Dylanna and Nazareth faroles to carry in the parade tonight. She took some magazine and catalogs Nancy was finished with an made the faroles. Paper mache with varnish to protect from the rain. There are little tiny battery operated lights too.  Many of the more elaborate faroles will use candles!

It seems that in Atenas, different schools do the faroles parade on alternating years.  Dra. Candy just rolled her eyes and said “next year” when I asked if her kid was in the parade.

Saturday is another parade with lots of drums and marching and cars and trucks and horses and tractors and trucks.

Typical small town Independence Day parade.  Want to be IN the parade? Just line up and start walking.

We had some bank biz to conduct today. They were celebrating too. Many of the women wore kerchiefs around their necks and everybody was dressed in denim pants. They had music playing in the lobby and we were served tiny tortillas with some potato stuff (name escapes me.)

Suddenly a lot of sirens sounded. The bank employees all stood up and craned their necks to see what the excitement was. A firetruck and ambulance were escorting a bunch of high school kids who were running the Costa Rica flag through the center of town. Then the church bells rang and a few exploding fireworks boomed.