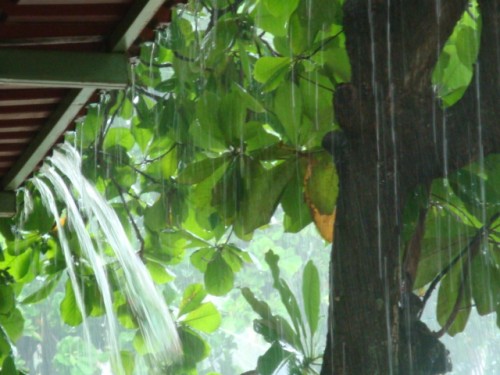 The only reason NOT to visit Costa Rica during the Rainy Season (or as the tourist folks call it – the “green” season because everything grows like crazy) is if you:

I did the retired guys thing and kept track of the rainfall at Sedolsoder near Atenas for the month of August. Here is my report:

Days with a trace of rain: 3

Gotta say, August was very doable. Many days started with bright sunny skies that lasted until sundown and then the clouds and rain moved in for a nighttime rain. Other days the day would start the same and the clouds and rain would move in late afternoon. (After 3 p.m.)

But one or two days started out cloudy and rainy and got worse. Those are the worse.  Around here, when the clouds move in, they are not overheard, they are AROUND us. You might refer to it as fog.

Used to run to Target or Panera or Barnes and Noble when we lived in the old country. So far we have survived with only one trip to the mall in Escazu – just for something to do while it rained.

The rains will last through the end of the year with October being the worse of the rainy season in our neck of Costa Rica. Then it will be three months of total DRY. Last year, we went 90 days without measurable precip.