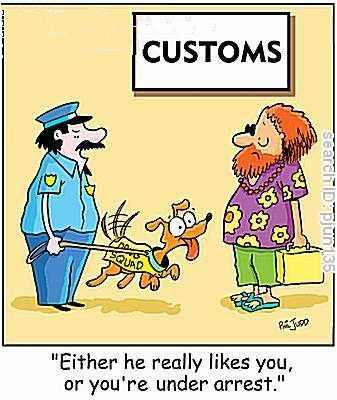 I was successful at my first attempt in muling (or is it muleing) contraband from the U.S. to Costa Rica as a resident. I think some others were not so successful.

During my arrival at Miami customs a woman standing in line behind me got the kind of attention the dude in the cartoon  above got.

It was kinda fun to watch. The dog was sniffing along a huge line of bags, came to her bag, and sat down beside the bag. The customs agent questioned the woman as to the contents of the bag — mostly baked goods she explained. The agent didn’t touch the bags, but gave the dog a hand signal, as if to ask “are you sure?”

The dog stood up and put his nose on the bag. More questions.

One last time, the agent backed up a step, gave the dog the same hand signal and I swear I could hear the dog sigh in exasperation as he slammed his paw down on the bag in question. The agent got the message and other agents were summoned to escort the woman away.

On my return trip to SJO, I had a lot of contraband. Important stuff:

I had one giant checked bag at the 40 pound limit. It held the most valuable stuff… but there was lots of room left over. I crammed my clothes and some of the smaller contraband (sprinkler and water faucet etc.) into a smaller checked bag. It was jammed. Not even room for a single serving lemonade packet.

My carry-on was also jammed so full, I couldn’t zip it shut.

In the CR airport, passengers line up to load stuff on an Xray machine. If I had a bag I would have designated to be flagged for inspection by Costa Rica customs, it would be the one they picked.

And I had another bit of luck. The one inspector was already dealing with a Gringo bringing in contraband. They were struggling with the language barrier as I arrived.  The inspector motioned me to open  my suitcase so he could look in.

He grabbed the water faucet and asked “cuanto?”  (How much?)

Waves me through. Five minutes later I have all the stuff re-crammed and I vamoose.

The other Gringo was taken off to pay taxes on his contraband. I’m sure it wasn’t as exciting as my garbage disposer.

Foot note: I also got to skip the Tourista line and enter via the “Nationale” process. That was fun – being the only Gringo among the Ticos. And the touristas looked at me longingly as they stood in their long line.