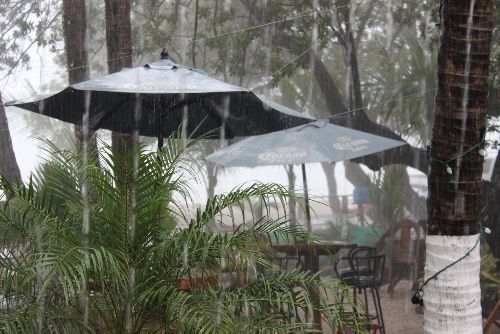 October brought 6 3/4 inches of rain on Sedolsoder. Compared with the 35 inches for the same month a year ago, we love this kind of rain.

The worst stretch we has was a week where we didn’t see the sun for four days straight. Woke up to thick clouds, then it would rain, then clouds move in again and then rain some more.

We have had more non-rainy days this month than rainy days.

The dry season will arrive earlier than normal this year, according to the Instituto Meteorológico Nacional.

Usually the change comes with the Christmas winds – a couple months of very strong breezes. Enough that we needed to batten down the  swing and lawn chairs.

We’ve had some nice winds, but nothing sustained. We could skip that part of the weather change also as far as I’m concerned. Then I could open the pool and not have to spend hours cleaning out the leaves and bracts and flowers and junk.

The Central Valley where where most of us live, will see the rainy season end in a couple of weeks according to the weather experts.

I wonder if I have it in me to do NaBloWriMo…   this would qualify me and get me rolling.