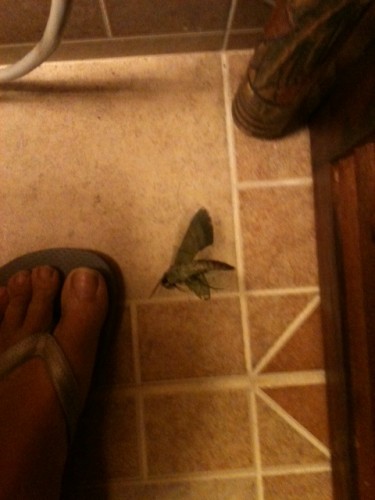 The windows are always open to catch the evening breeze which the overhead fan pushes down on our hot heaving bodies. (Sofi included.)

To refresh you on my medical afflictions, I have sleep apnea and use a CPAP (google it or look in the “related” links below) to help me sleep.

Therefore, when I was awakened by the fluttering of wings, I knew it had to be a significant event. Normally, if there is a bug in the room and I can hear it, we’re cool. As long as they stay put and don’t dive bomb me or buzz around my head, I’m fine.

But this sound was different. It sounded like a hummingbird!

So I disengaged from the CPAP and grabbed the nearby flashlight to search for the disturber-of-my-slumber.

I found the giant moth flapping it’s wings attempting to escape through the screen.

Rather than try to kill it, I just closed a few sections of the windows and generously sprayed it with bug killer.

I reengaged and attempted sleep.

But all I accomplished was pissing off the giant moth who began to flutter furiously. (I could tell by the expression on its face that it was furious.)

Knowing that eventually it would fall on my head and I would jerk upright and the CPAP would go flying, I disengaged.

I searched up and down the windows.

I layed back in bed and told Nancy I thought the bug killer had worked.

Shouldn’t it go THUD? she responded.

While I reassured myself that this moth was not big enough to go thud…the fluttering began again so I could tell the moth was NEARBY.

I looked behind the bed and there it was in a death flutter.  I took the nearby baseball bat and reached town to pull it out so I could get a good swing at it.

Death Comes to The Moth.

(Name for my rock band.)

I picked it up for Nancy to admire and she said:

You sure that’s not a hummingbird?

…and SCENE… of another episode of living in Costa Rica comes to a quiet close.