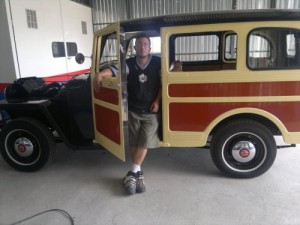 But wait it gets better: the car is just down the road from our house, on the edge of Atenas.

A 1978 Chevrolet sedan in primo condition.

But wait, it gets better: The guy that owns it is just the third owner!

OK, gearheads, stop salivating… the current owner is a young guy that does bodywork for a living. In no time at all, he will have the classic looking as sweet as the Overland Willys “woodie” shown above.

The Chevy is a V8 but with a two barrel carb. Surprisingly there is some rust bubbles, so I’m guessing at some point in it’s lifetime the car spent some time by the ocean.  Alejandro told me he plans on putting some airshocks on it. It already has wide rims and fat tires, it won’t take much to make this  a low rider. Not sure that’s practical here in Costa Rica, but gearheads don’t do practical right?

Alejandro isn’t sure when the car was imported, but a clue is the phone number on the papers with an address in San Jose, it’s four digits. Currently they are using eight. So the car has been here a while.

But wait, it gets better: He lusts for a 1975 to 1978 Cadillac Sedan DeVille. He is shopping the U.S. websites and knows the prices and shipping costs and Costa Rica tax costs. The dude is a serious gearhead. He is hoping to eventually sell the Chevy and make enough money to import the DeVille.

But wait, it gets better: He is also an actor! His girlfriend is our Veterinarian and she dances for fun. We saw her recently and she told me that Alejandro was in the theater.

But wait, it gets better: the theater group he belongs to translates as The Flesh Theater or The Meat Theater.

Of course when I told Nancy that she was sure they acted naked.

Terri is Nancy’s friend that came down with her to Atenas to shop for a house. We she met Pablo, our attorney, she said, He’s so cute, I couldeat him up with a spoon.

Later, she met Alejandro and told Nancy, Hmmmm, I’ll be needing another spoon.

Costa Rica is the happiest country in the friggin’ world. One of the reasons is the people all participate in some kind of activity that is unrelated to their work. Alejandro explained that people need a way to relax when not working, so they play the guitar, or sing, or surf, or dance, or act.

It doesn’t get better.